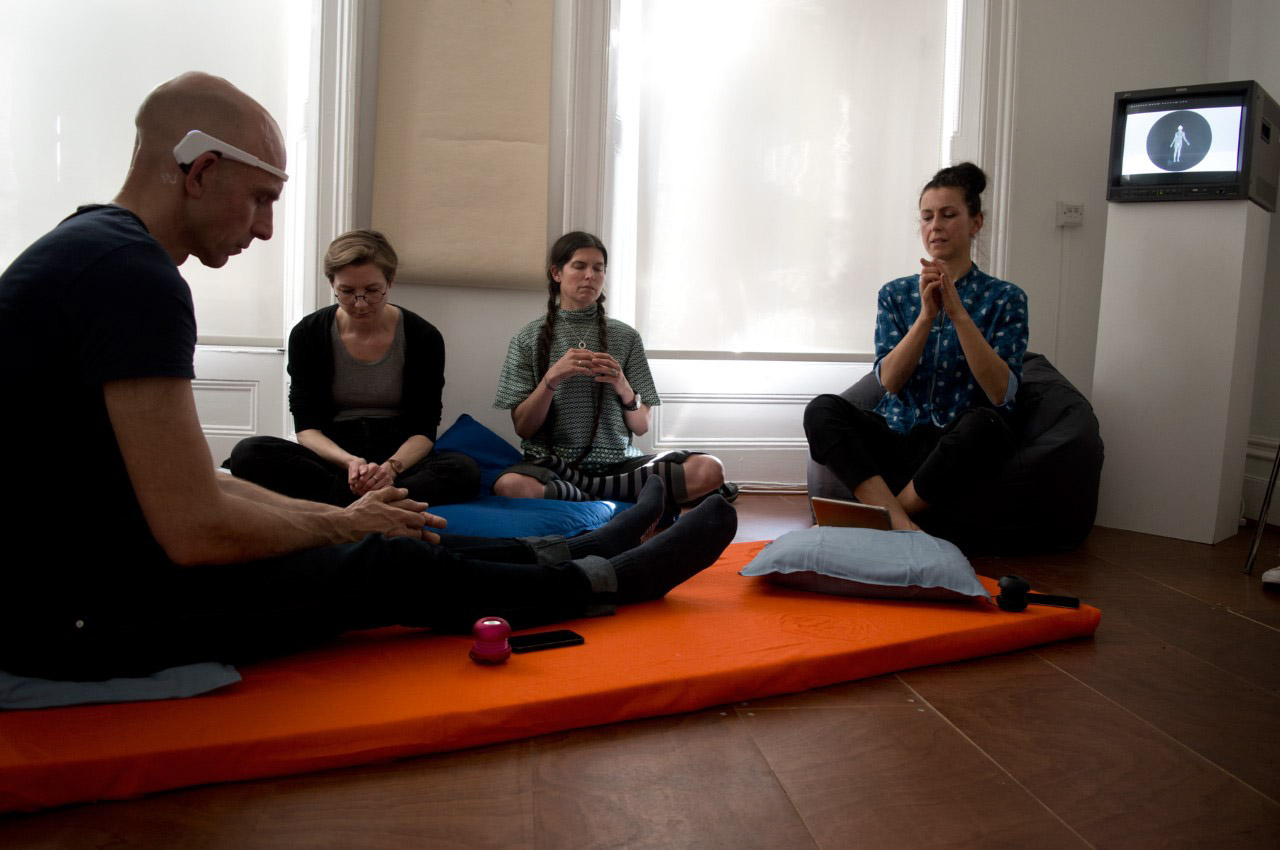 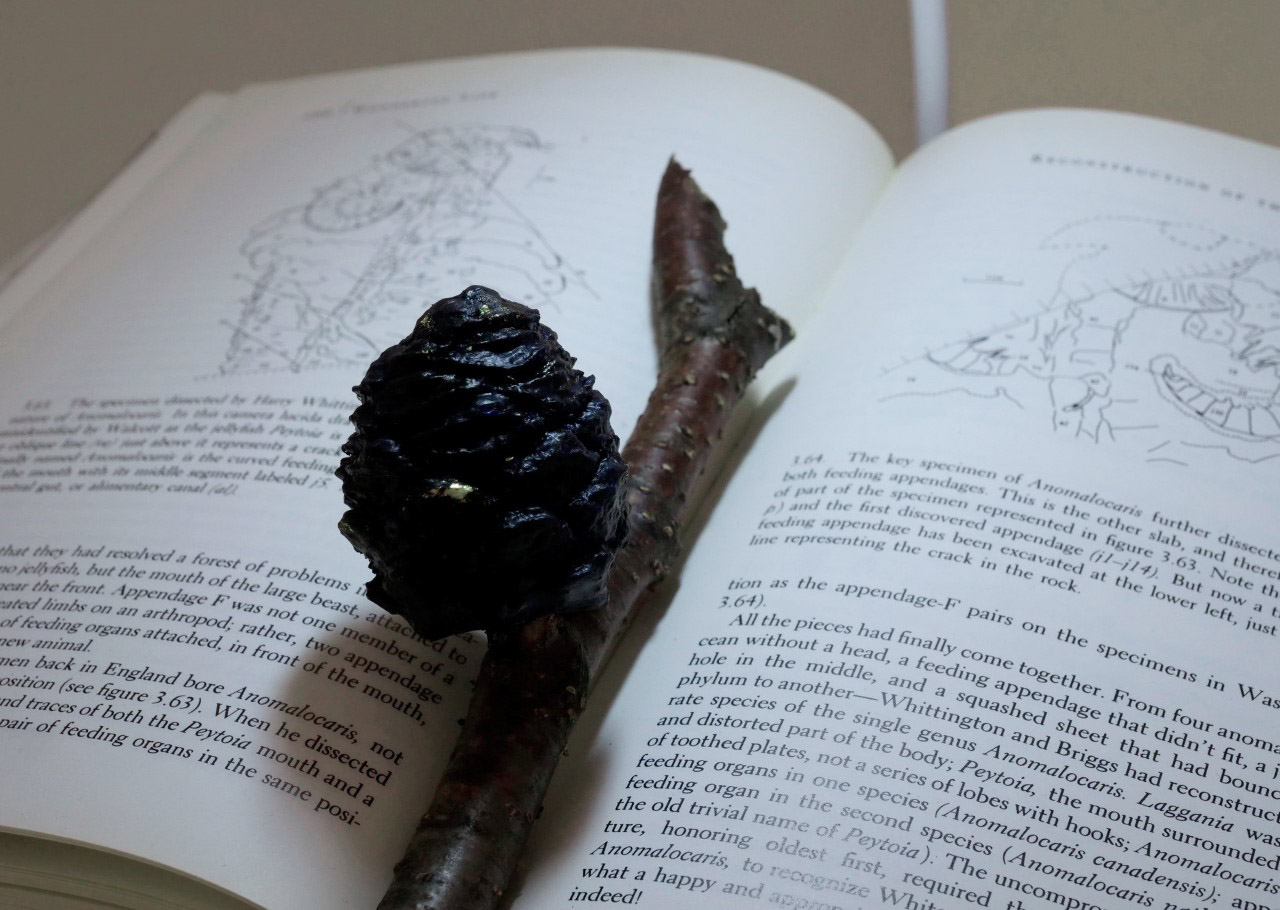 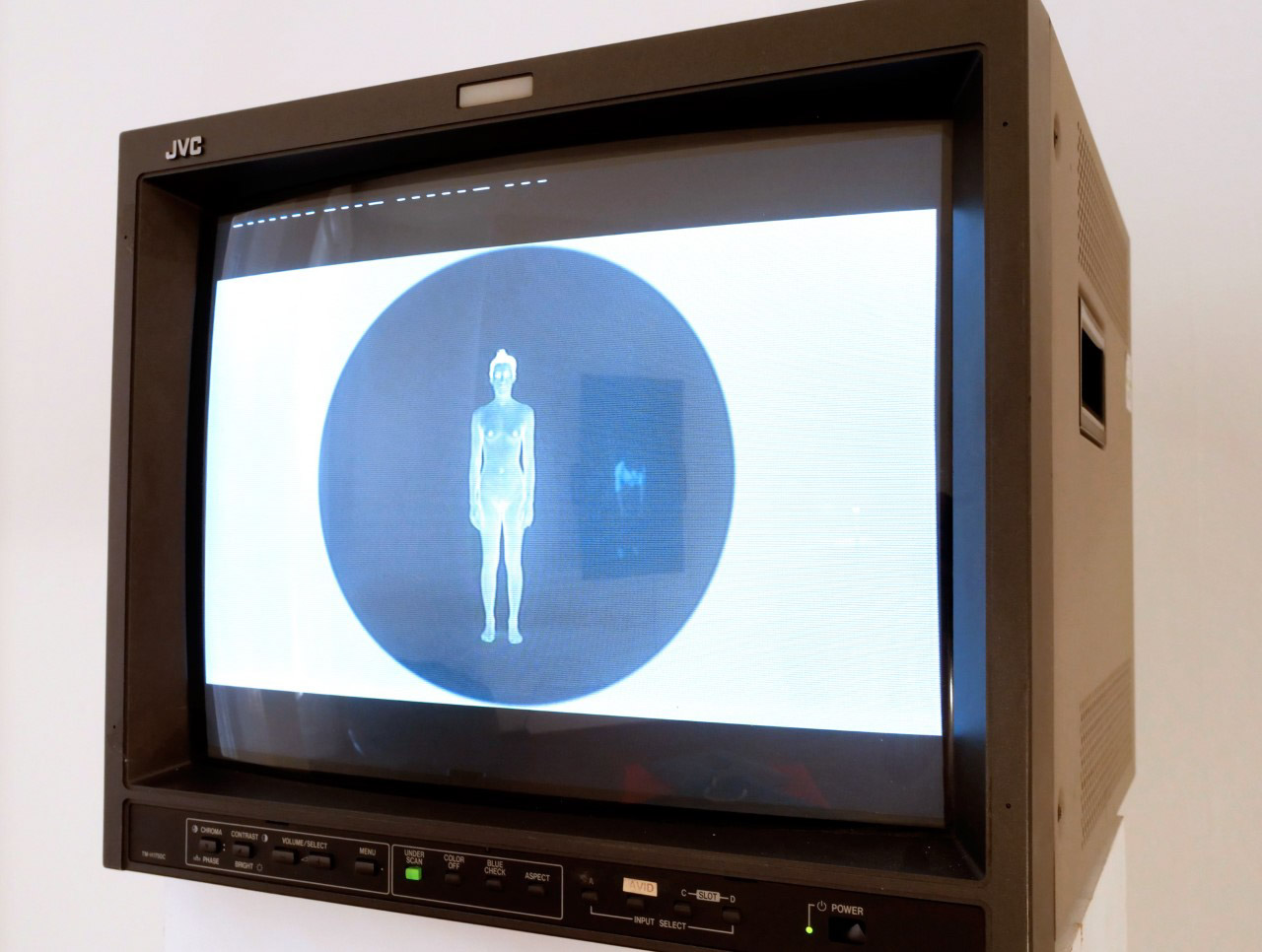 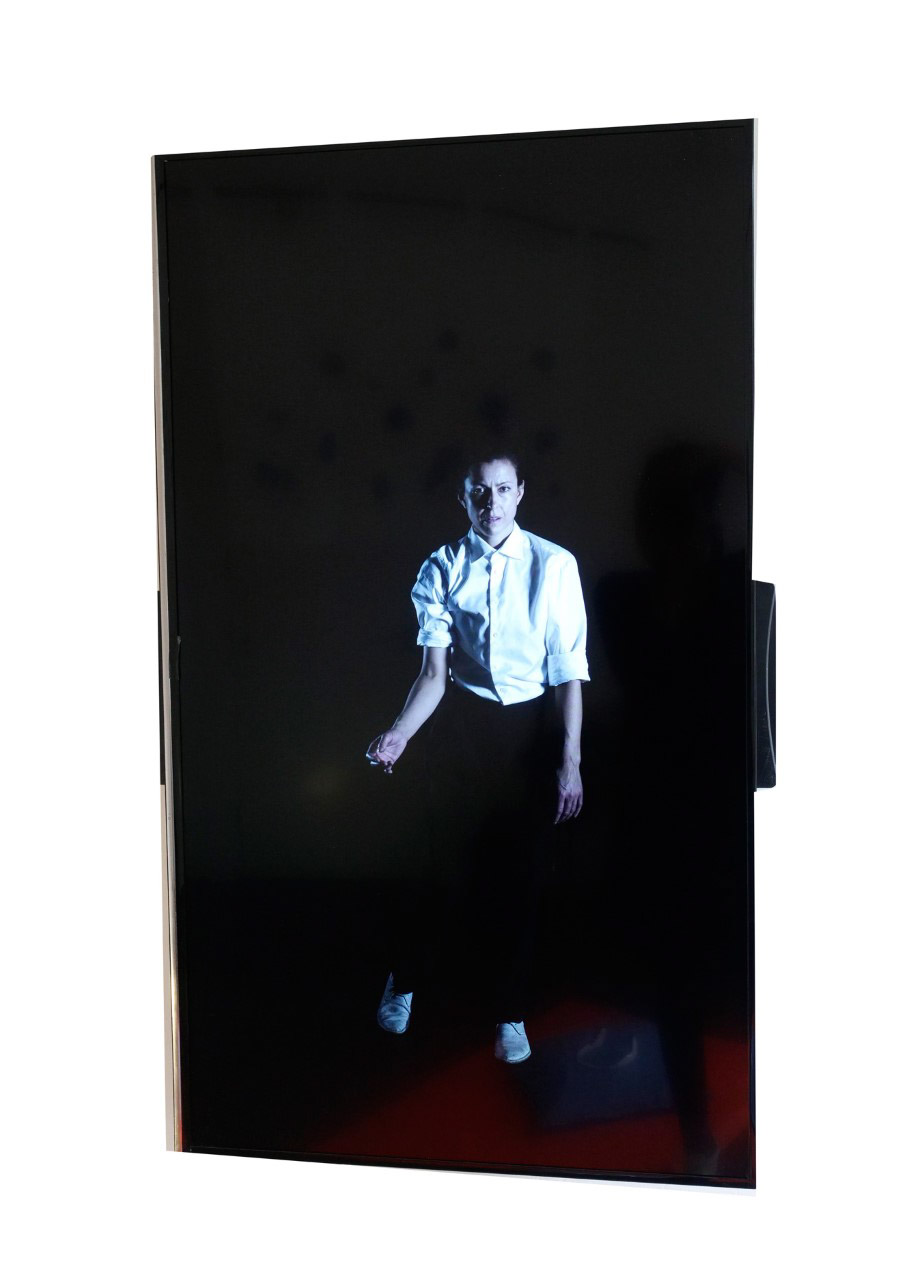 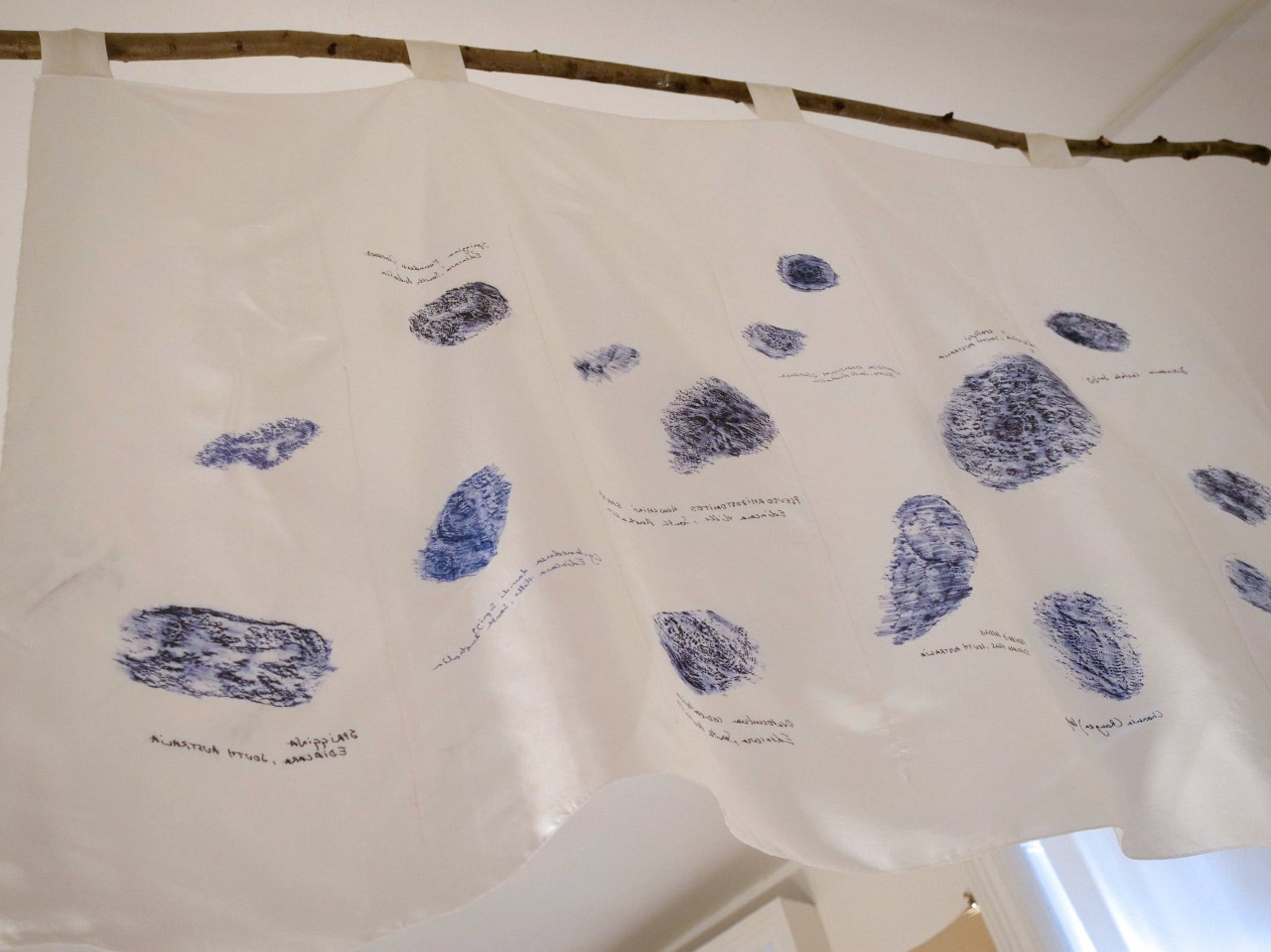 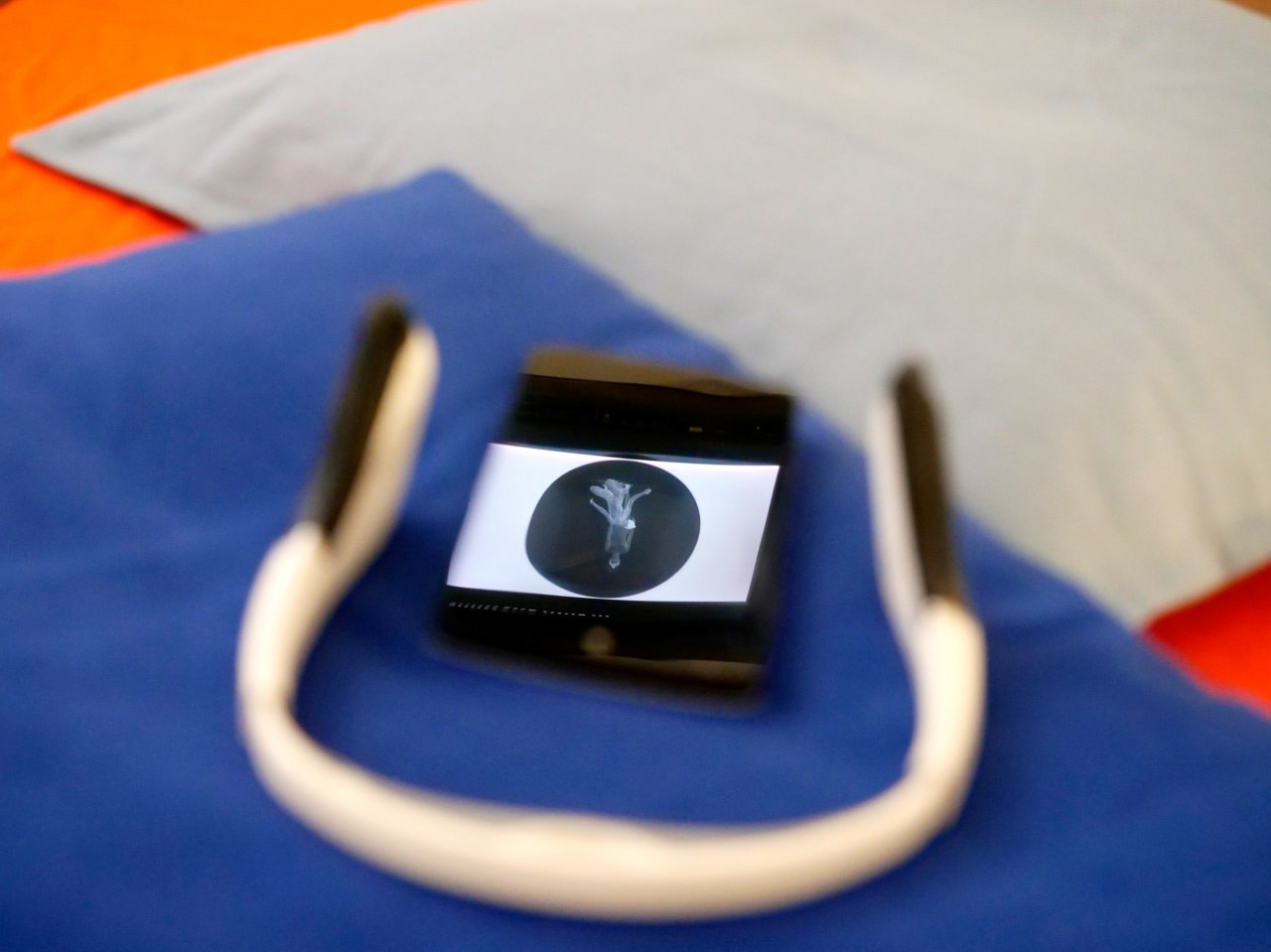 Let the Music Make Them Dance

The installation is conceived as a rhythmic field, composing elements of sound, movement textures, scribbled and doodled lines, and brainwave biofeedback.

The automatic drawing installation on the walls maps out an 18 month-long daily dance research method called Liquidity (inspired by the Surrealists’ experiments in automatism). I try to induce an altered state of consciousness through this movement; then I document both my inner experience in the drawings and measure my brainwaves using an EEG monitor.

A moving image piece, presented on two facing screens, is a slow Sisyphean cycle of rising and falling, order and entropy, transmitting an uncanny dynamic across the room. On one screen a ‘salaryman’/jazz dancer seems to be floating underwater to the tune of a remixed Muzak track from the 1970s: Stimulus Progression was background music developed to increase productivity in the workplace or the shopping mall. On the smaller screen the same movement is performed by female bodies that become an hour-glass marking time through their rhythmic repetition.

A low noren curtain touches the viewer’s head upon entry, shifting the air in the room and setting the soft silk fabric in motion. It depicts fossil rubbings of the Ediacara biota, when the first multicellular organisms appeared, 650 million years ago. It was marked by underwater gelatinous organisms, and a lack of predation and seen as the Edenic moment in the evolution of life on earth. In the corner on a lecturn, is the book ‘Wondeful Life’ by the paleontologist Stephen Jay Gould, an account of the transition to the Cambrian era when heads, mouths and eyes start to appear.

Visitors were invited to participate in a series of meditations in a comfortable relaxation space in the middle, where they could track and measure their brainwaves using Muse EEG headbands and compare results with other participants.

‘Let the music make them dance’, is a quote Shoshana Zuboff attributes to an unnamed data scientist. Unmasking the threat in her book The Age of Surveillance Capitalism (2018), Zuboff claims that our habits reveal what makes us tick: our automaticities expose our vulnerability to economic, technological and political manipulation. Freedom is at stake. Each aspect of the installation explores a facet of the ‘paradox of automatism’ (and automation) – the paradox lies in the apparent ‘convenience’ that drives much technological innovation: were it possible to trace the time supposedly liberated through such gadgets, where does it go, what does it become? Research in psychology, suggests that it is while being engaged and immersed in activity, that automatism comes about, and time appears to become liberated – this is the ‘effortless and timeless’ experience called the ‘flow state’.

Dominique is an artist whose work functions as a question addressing the endlessly mysterious alterity that is the body: a body that is both, self-conscious identity - subject – and abstract materiality - object. The outcomes of this ‘embodied philosophy’ are her installations, performances, moving image pieces, drawings and writings. Her works propose a speculative science, both existential and experiential, that participates in an intimate relation with nonhuman agents, inciting new rites of passage for the ‘era of the Wobble’. Space of the Nameless is Dominique’s current doctoral project, within the research cohort of the Art Department, Goldsmiths University of London. Her research looks at threshold states in ‘nondual’ spiritual practices, exploring the sensorial modalities of transitional moments. She is active in Europe and Asia and has shown work at Nakanojo Biennale, the Isamu Noguchi Room (Keio University) Tokyo, Galerie Wedding in Berlin, the Bangkok Art and Culture Centre (BACC); presented ‘Tales of Fabrication’ at the Tai Kwun Centre in Hong Kong (ASAP Symposium); screening at Tate Exchange, London. Her public space performances have been commissioned by Chisenhale Dance Space, London and Håb / Word of Warning in Manchester. She collaborated with Astrida Neimanis, author of ‘Bodies of Water’, for Lofoten International Arts Festival 2019