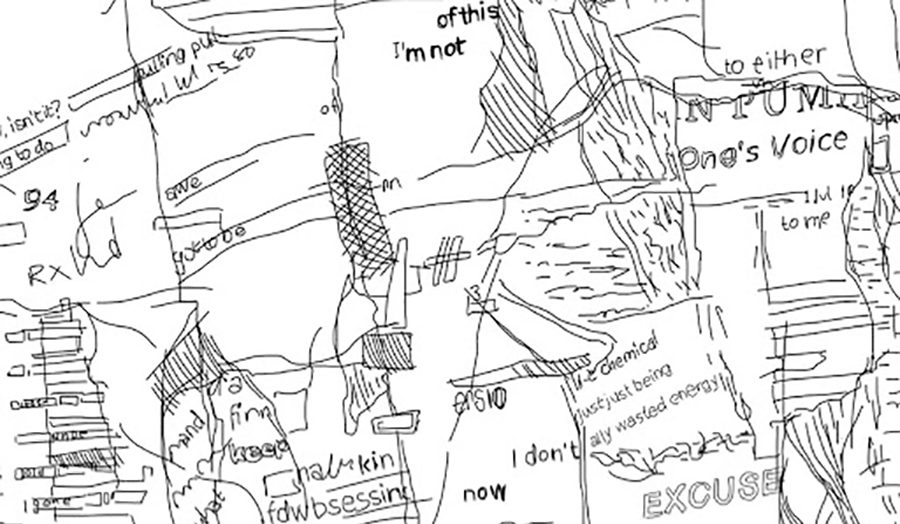 Bringing together three artists whose work engages with the writing/performing of character, voice and persona, this seminar drew on the metaphor of the breathing space to explore the complexities of inhabiting, speculating on and speaking through intertwined fictional others and self-hoods. Proposing the breathing space as a condition of generative possibility for the emergence of speculative entities, absent voices and auto-theoretical self-versioning, the seminar explored questions of speaking for/with/as in ways that both embrace the unboundedness of the self whilst acknowledging the specificities of positionality that are involved in any act of narration.

A breathing space may be a new condition to claim through a speculative fiction mode, whilst announcing it missing from this world; it may be a state of rest, daydreaming and dissociation that both offers respite from, and arguably enables, the operation of regimes of efficiency which demand the continuous presentation of self; it may be a site of habitation shared between writer/performer and the voice of an other. How do different ways of working with persona/character propose different models of selfhood as multiple, entangled and processual? What is it to work in a speculative mode for, what might be, writing for missing others? Can the breathing space of one subject become a medium for another, by ‘making space’ for ‘someone’ else? How does self-narration become compulsive within a horizon of endless self-branding and how can this model of presence be resisted? Professor Kristen Kreider and Michelle Williams Gamaker kindly participated in responding to the following three approaches to spaces and voices. We have attempted to incorporate the insights of our respondents and wider audience into these accounts, representing a cumulative effort in working through some of these ideas.

Through a series of presentations/ performances and a group discussion, we explored different modalities of the breathing space as a medium for voices, to probe how a character/voice may come to a space to speak. 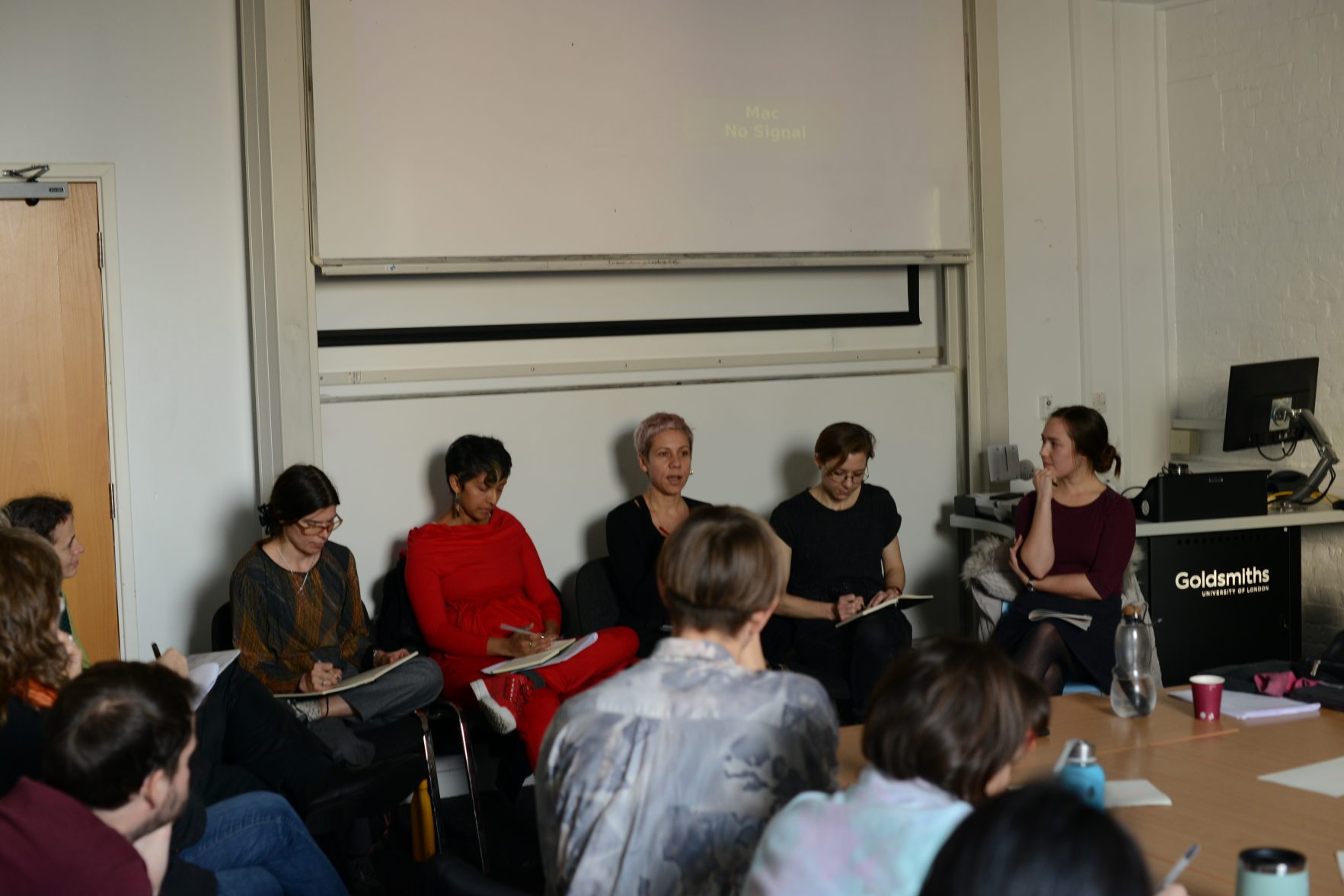 Accommodating Others: The Role of Author as Medium

The first section of the seminar meditated on the notion of an artist or author as somebody who channels, facilitates or mediates something ‘outside’, or other to themselves. Katarina Rankovic performed ‘Pseudo’, a work in which a fictional person occupies her voice and face for ten minutes, hurriedly trying to persuade those present that she is entirely autonomous and authentically person-ful in her own right. The character was in and out of the room in a flash. One member of the audience said he was already imagining her absence during the discussion over coffee afterwards. Where did she come from and where did she go? Is the performer ‘merely putting her on’, or is there some reality to be ascribed to the state of fictional being? Is it an emotive illusion, a work that seeks to tug at your empathy and trick you into acknowledging the character as a person, or, is this the very flesh of personhood being reworked and reconstrued before our eyes?

A useful application of art which appears frequently in many practices, is the method of insisting upon a certain ambiguity, like that between the character and person, in order to bring a question into the tangible realm of language. It can be a good way to start posing a question you’re not at first sure how to pose. And when Katarina stopped performing, there was a certain relief; the ordeal of the character was over - she had gone back to sleep in that soup of plausible persons and we could begin to talk normally amongst each other again, real persons only.

The performance was followed by a working paper that began with a historical analysis of some of the ways in which commentators and artists have modelled the role of the author as a kind of medium, from antiquity to today. This model of the author seems to attempt to account for a relationship between distinct agents separated by a distance - between self (artist) and other (the ‘spirit’ of the artwork). While different models of this nature ascribe the creative act to different sources (divine, subconscious, citational reference), a common theme that emerges in these different accounts is that the other must reveal itself through or in the author, as if the author, or perhaps more broadly a person, were a spatial arena in which some transformation, movement or reaction could take place, as if the author-person were a machine capable of processing otherness, complete with an internal space roomy enough for these apparently mysterious permutations to take place. A discussion of the pervasiveness of the model of interiority in signalling personhood quickly reveals flaws, where a homunculus must be invoked. But does that mean our psychic insistance on some sort of spatiality involved in the making and being of personhood is a categorical fallacy? Perhaps it is worthwhile refraining from discarding the idea just yet, or patronising habitual uses of prepositions (through, in, between, from, out) when talking about person and the mediation of character. This section of the seminar concluded in asking, “can we find another ‘shape’ (other than that of the vessel) that can model personhood and the authorship that takes place at the same site?” and presented as an alternative candidate, the model of the physical wave. The physical wave exhibits the dualistic properties associated with ‘body and mind’, in that a wave is a pattern, or abstracta, that emerges from the field; and the field is simply ‘that which waves’.

In this performative lecture, Erica Scourti drew on her own Twitter archive as primary source material to explore social media, autotheory and affective labour in a digitised reputation economy. Using a selection of her 12,000 tweets to muddy of the line between the artist’s ‘real’ work and their online persona, the talk questioned where the workplace and the stage ends for artists who ‘play themselves’.

Partly scripted, partly humorous and partly a straight-up critical reflection on the embodied effects of surveillant and emotional capitalism, her talk foregrounded the psychic, relational and somatic fallout of regimes of ‘high performance’ productivity- particularly with regard to burnout and the need to project and perform an entertaining, amiable and interesting persona both online and in wider working environments.

Drawing on Arlie Hoschild’s notion of ‘deep acting’ in service industry work, the talk drew on Scourti’s own use of Twitter as a written, but unscripted and open-ended, performative autobiography that elides distinctions between online/ offline, real/ fake, public/ private. Paying particular attention to how artists and other cultural workers both navigate and attempt to undermine the accumulation of reputation capital, the talk will also consider Rey Chow’s notion of the ‘automatised being’, to foreground how ‘making a spectacle of oneself’ as critical strategy operates within artist-writers’ practice. 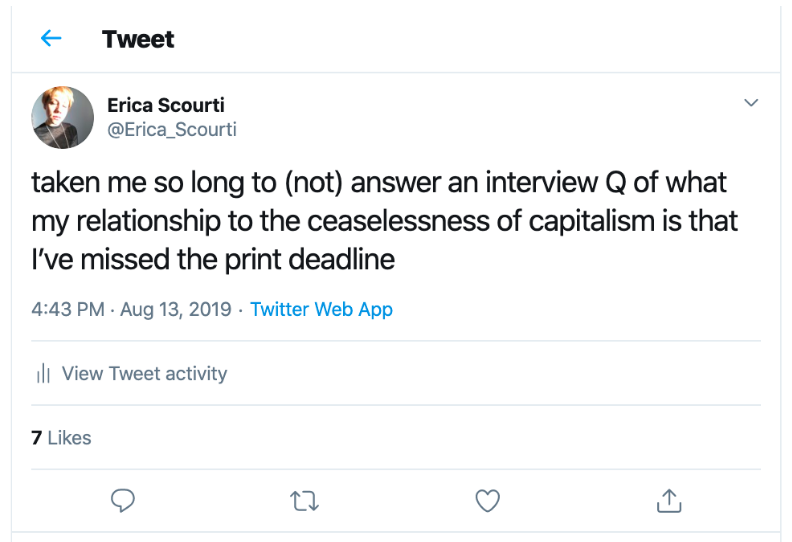 Katarina Rankovic is an artist working in text, performance and video, using these platforms to invoke narrative as a testing ground for examining author-character-reader subject relations. katarinarankovic.art

Erica Scourti is an artist and writer, born in Athens and now based in London and Athens. Embracing contingency, humour and lo-fi media, her work explores autobiographical writing and bodily inscription in the performance and representation of subjectivity. Ericascourti.com

Rowena Harris is an artist exploring theories on the datalogical in relation to neurodiversity, and works across writing, sculpture, and film work. She is interested in those at the margins of algorithmic priorities, and, through modes of speculative fiction, alternative spaces of thinking differently. rowenaharris.com

Michelle Williams Gamaker is a moving image and performance artist based in London. Her work explores the fiction-making machine of 20th Century British and Hollywood studio films by restaging sequences to reveal cinematic construction, and recasting characters to propose alternative endings that counter their often doom-laden plight. Her key focus is the development of ‘fictional activism’: the restoration of marginalised brown characters as central figures, who return in her works as vocal brown protagonists challenging the fictional injustices to which they have been historically consigned. tintypegallery.com/artists/michelle-williams-gamaker

Professor Kristen Kreider, (the director of the PhD program here) is a writer, a poet, who works in collaboration with the architect James O’Leary to engage with sites of architectural and cultural interest through performance, installation and time-based media. Her research stems from an interest in the poetics of thought, its materialization as form, and a concern with how artworks relate to the world. Kreider-oleary.net