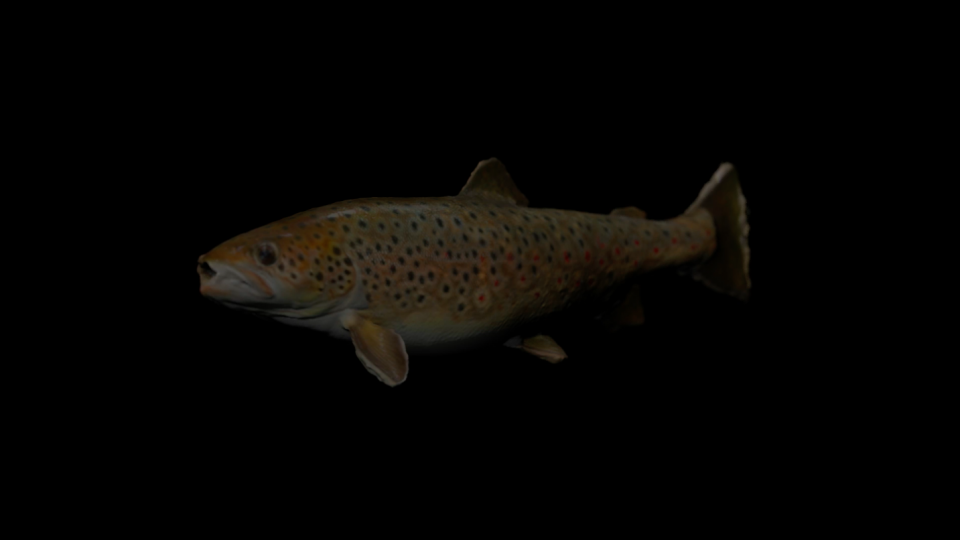 Taxidermied fish, Surrogate stomach and other stories 2019, was presented as a live performance consisting of a short story/ instructional read live, amplified through a vocal mic / SANSUI AU-101 analogue amplifier and through a rotating Leslie speaker. The speaker rotates at two speeds: CHORALE (approx. 48 rpm) for a slow pulse and TREMOLO (approx. 380 rpm). The performers voice was undistorted when the speaker was stationary and distorted significantly at both rotation speeds. The performance brought together discursive and interconnected stories of fly fishing; the fishes aesthetic decision making, especially under UV conditions; Irish loughs, their connections to environmental enrichment; and destruction, with the introduction of alien/ invasive species. The lakes are also interconnected as historic sites from the recent conflict in Ireland to as a site of the Derryveagh evictions in the late 1800's and the formation of the new lake due to the Atlantic storm of 1920. A moving image render of a 3D scanned taxidermized imposter brown trout is projected onto a screen at the start of the performance.

The rotating speaker creates the Doppler effect and in turn the speaker becomes and once the surrogate stomach; the marrow scooped contents of the invasive trout species; the autopsied stomach of murdered young men during Bloody Sunday and Caoimhín's new stomach fashioned from the small intestine after a lifesaving cancer procedure.

This performance and research ask how we might apply similar approaches to trauma and care, in particular, with reference to post-conflict/ intergenerational trauma in the north of Ireland. 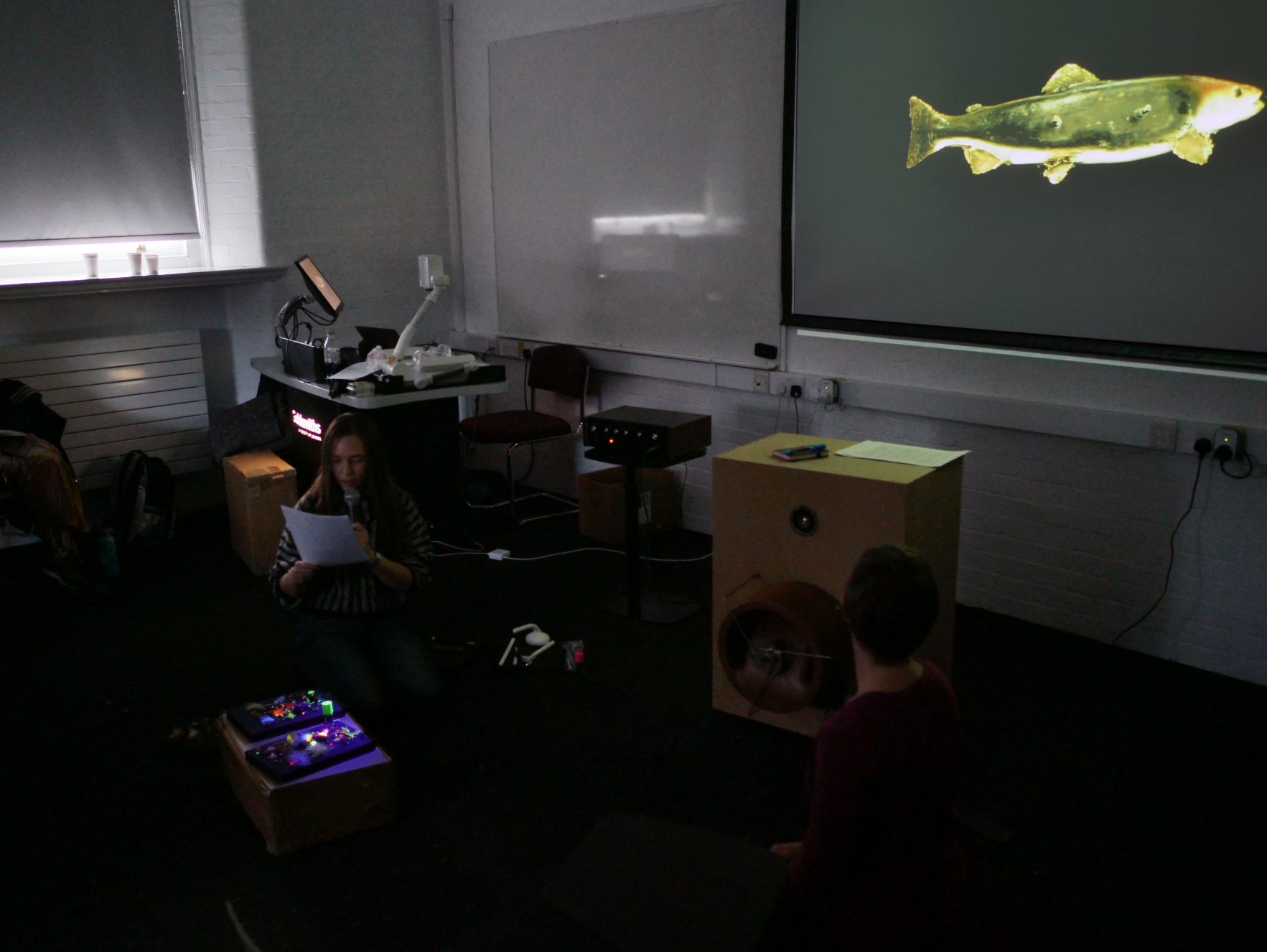 The Fish at lough fad east - script for a performance. 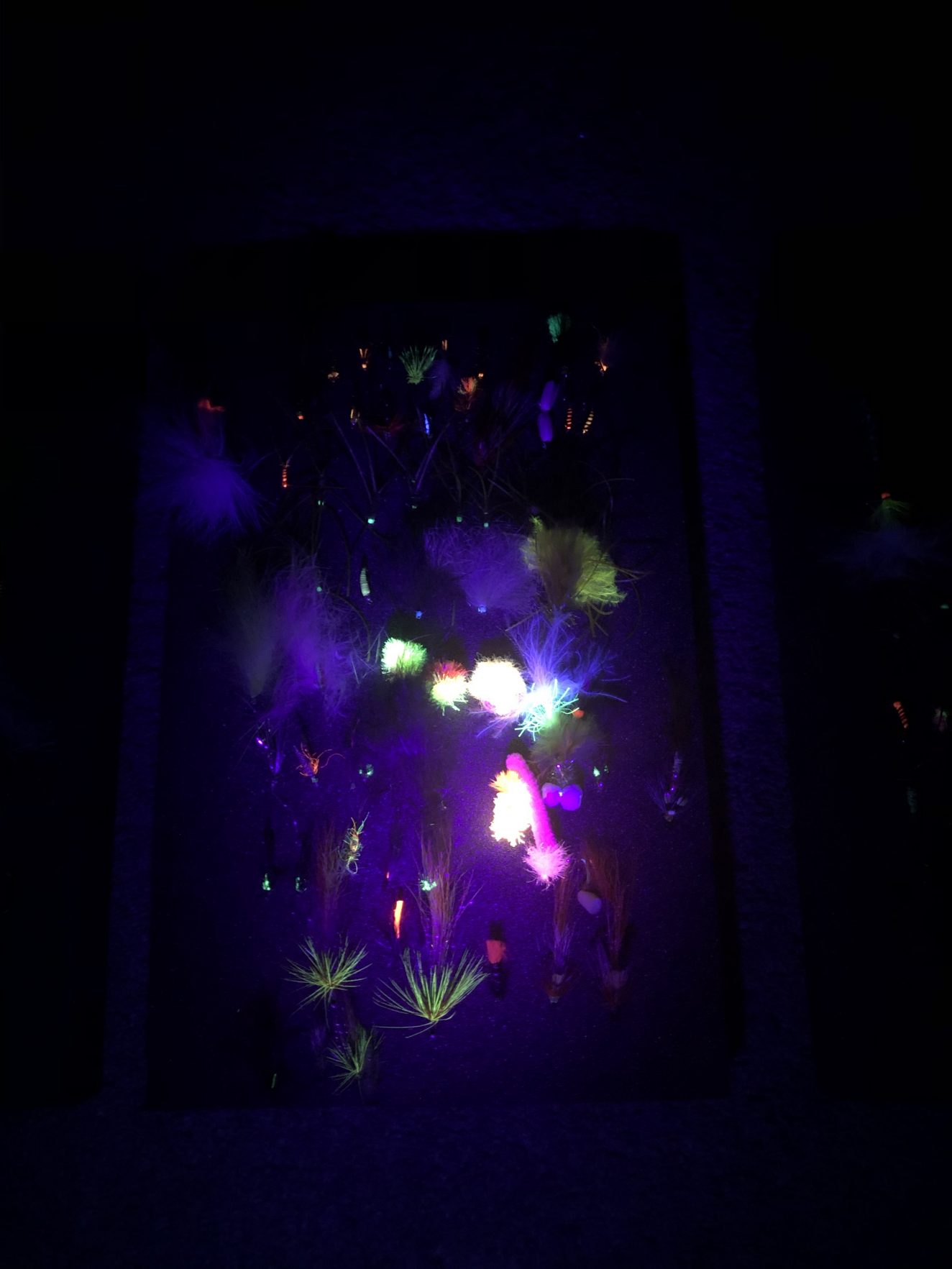 Fluorescent and UV reactive materials have now become commonplace and a new market has emerged, offering kits of UV gels and glues that are cured rapidly by a UV light source. The idea being that when the atmospheric UV is high insects, mainly nymphs and larvae UV

Reflect UV light and are more discernible to the fish. Likewise, if the artificial equivalents have Fluorescent and UV reactive materials, they will be more appealing to the fish under conditions with high UV in the water or on the surface film.

An accurate analysis of the marrow spoon will help catch more of the invasive trout, which should help to re-establish the arctic char. If used correctly and after the fish has been killed quickly with the priest, the marrow scoop will display the stomach contents at different stages of digestion, if we say the fish’s head is facing right to left-this way *(gesture hand to the right). The spoon is inserted to the left with the open mouth facing right.  in order of freshness/ recent consumption - the more intact insects/ terrestrials can be identified helping to match the hatch and catch more fish.

‘The next day the post-mortem was being held, it was really a very gruesome day. 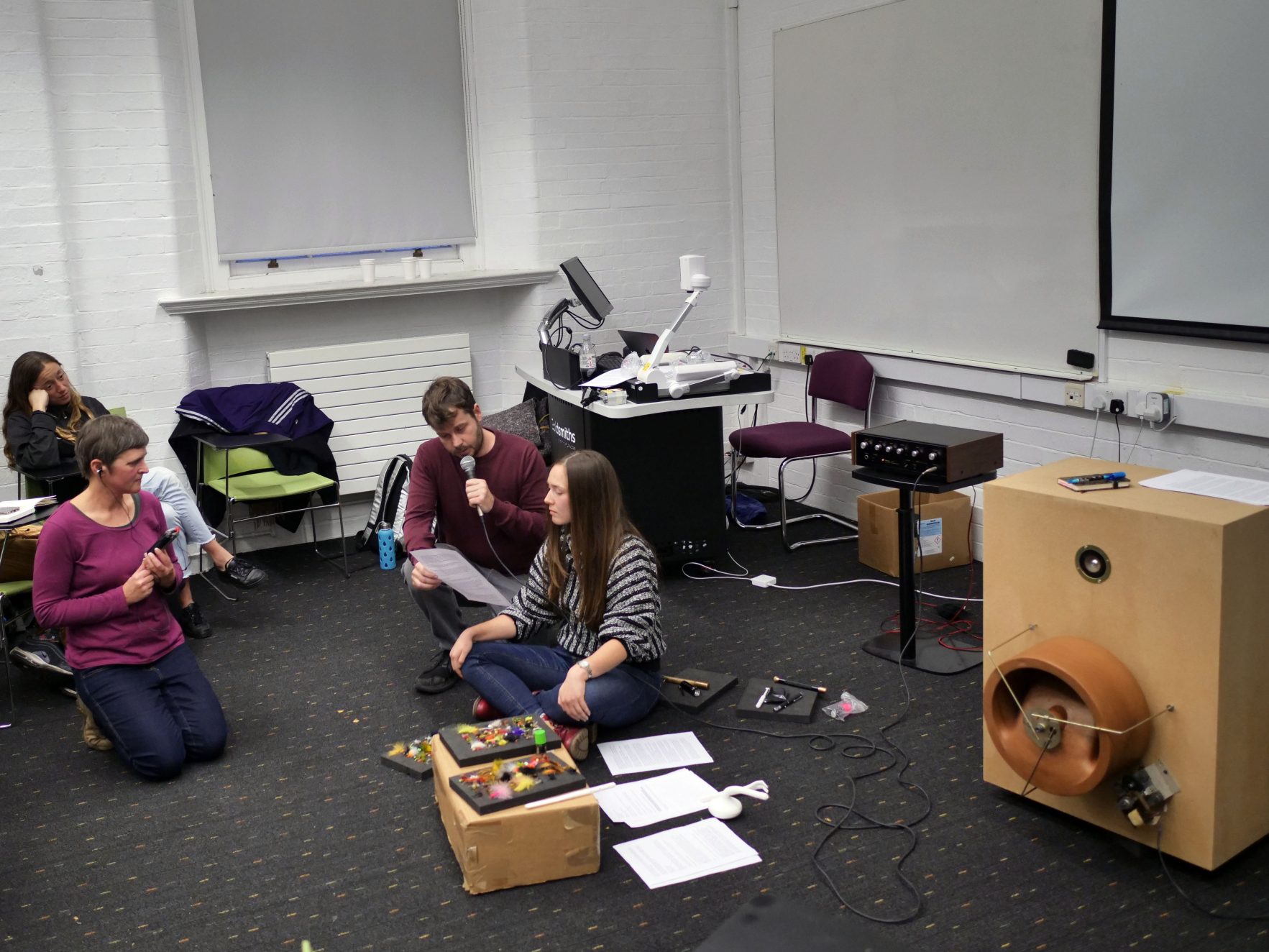 During the post-mortem, a lot of the stomachs were opened and the young boys they were mostly young boys that were shot, had roast meat peas and potatoes for their dinner. It hadn’t had time to be digested. And we had roast meat and peas and potatoes for dinner before we left that day. And I thought you know that could be me. It's just pure chance that I’m standing here, and those boys are there. And that brought it home to me more than anything. The fact that we’d all had roughly the same dinner before we went on the same march’. ref

The removal of the now dominant invasive species will only partly slow down the eradication of the native arctic char population. The char is very sensitive to water conditions, any enrichment can prove fatal to a whole population. In the case of Lough fad east, the spawning ground at the bank of the lake is damaged due to extraction, a dredged channel and spoil. The water level of this natural reservoir has fallen well below its average.

December 2004, Caoimhín is admitted to Alnagelvin hospital as a matter of urgency after the rapid results of the pending blood tests. The family had the misconception that Caoimhín may have a bleeding ulcer. It is later confirmed that the shortness of breath, pale complexion, and the circulation problems around the extremities were in fact due to a very aggressive form of stomach cancer. The surgeon (Dr Pannasar) informed the family that his procedure although radical would have good survival odds. The procedure would result in the whole stomach being removed and not just the infected tissue. His argument is that there was a greater chance of removing the whole tumour and less chance of escapee cancerous cells.

A new stomach pouch would be fashioned from the small intestine...The spleen was also removed.

His research explores complexities inherent within post-conflict and intergenerational trauma in Ireland and how it manifests. As part of the research, Ciarán has made a series of tools that are used throughout the project. He has an ongoing research relationship with a family of donkeys and a group of land snails, exploring interspecies relationships, labour and kinship. Recent research methodologies have centred around a table- a thinking pattern for accelerated capitalism, complete with the ‘speculative massage tools for a family of donkeys’.