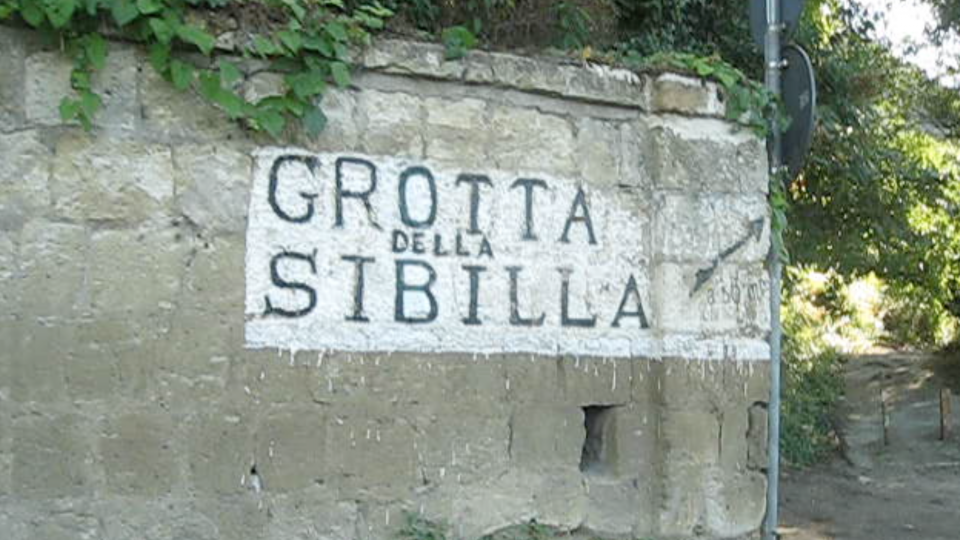 The first segment ‘Between the Cave and the Cosmos: A Place for a Feminist Prophetic Gesture’ included contributions by writers Giulia Damiani and Daniela Cascella. Their individual presentations showed the serendipitous overlaps between their research, in a way enacting an unpredictable ‘call and response’. Damiani and Cascella’s shared trajectory is invested in the tension between different places, times and languages/cultures.

The cave of the Cumaean prophetess near Naples is a tunnel to a place that is engraved deep down in the earth’s memory. It is a crack where the dead and the living, the undocumented and history, can feel each other. Giulia Damiani’s presentation draws on the work and archive of the feminist group Le Nemesiache, who inhabited the cave with their actions in the 1970s and 1980s. The group introduced the ‘psycho-fable’ as their method: the presentation discusses how this was a consciousness-raising process to claim ways to approach the land anew and simultaneously to imagine other forgotten pasts and unpredictable futures. It was a specific approach to theatre based on the body: women’s emotional and intellectual repression would have emerged through the physical, affective and symbolic layers of the body.

Damiani seeks connections between Le Nemesiache’s method and its potential appropriation today. In particular, their evocation of a future determined by women’s imagination opens up a space for new prophecies from the present. In the end prophecy emerges as a powerful channel of desire and a spur to action, leading to the following questions: how can we imagine a feminist prophetic gesture today? And what critical space can such a gesture engender?

‘Nothing As We Need It’ by Daniela Cascella.

Layering voice and recordings, I present a number of approaches to writing nothing as criticism: writing when there’s apparently nothing to say, after encounters that leave us speechless, or in the absence of safe reference points, as strangers in a language and in a culture; addressing materials deemed impossible to write because untranslated, inaudible, culturally opaque, not immediately recognised, legitimised, or accessible.

Writing nothing as criticism doesn’t mean that critical writing is useless: we need it. It calls for different modes of attending to the work, not speaking on its behalf, but speaking with it. It does not depend on the accumulation of sources, exhaustive surveys, or virtuosity: it employs instead what is at hand, even in the scarcity of material, and finds knowledge through other sources: textures, rhythms, silences, sounds. And poetry is never erased.

‘We’ introduces a collective space beyond I: writing nothing as criticism is enmeshed in conversations, at times silent or inner.

English is my second language, acquired and performed over the years to the point of fluency, yet still ringing strangely in my ears. I propose being a stranger in a language—being close but slightly out of synch—as a condition and metaphor for critical writing that reaches beyond the limits of textual analysis, beyond the Anglophone canon of hybrid writing established these years, and generates a material engagement with the fabric of languages, the translation of cultures, and the transmission of knowledge.

You can listen to Cascella’s accompanying sound pieces here and here. 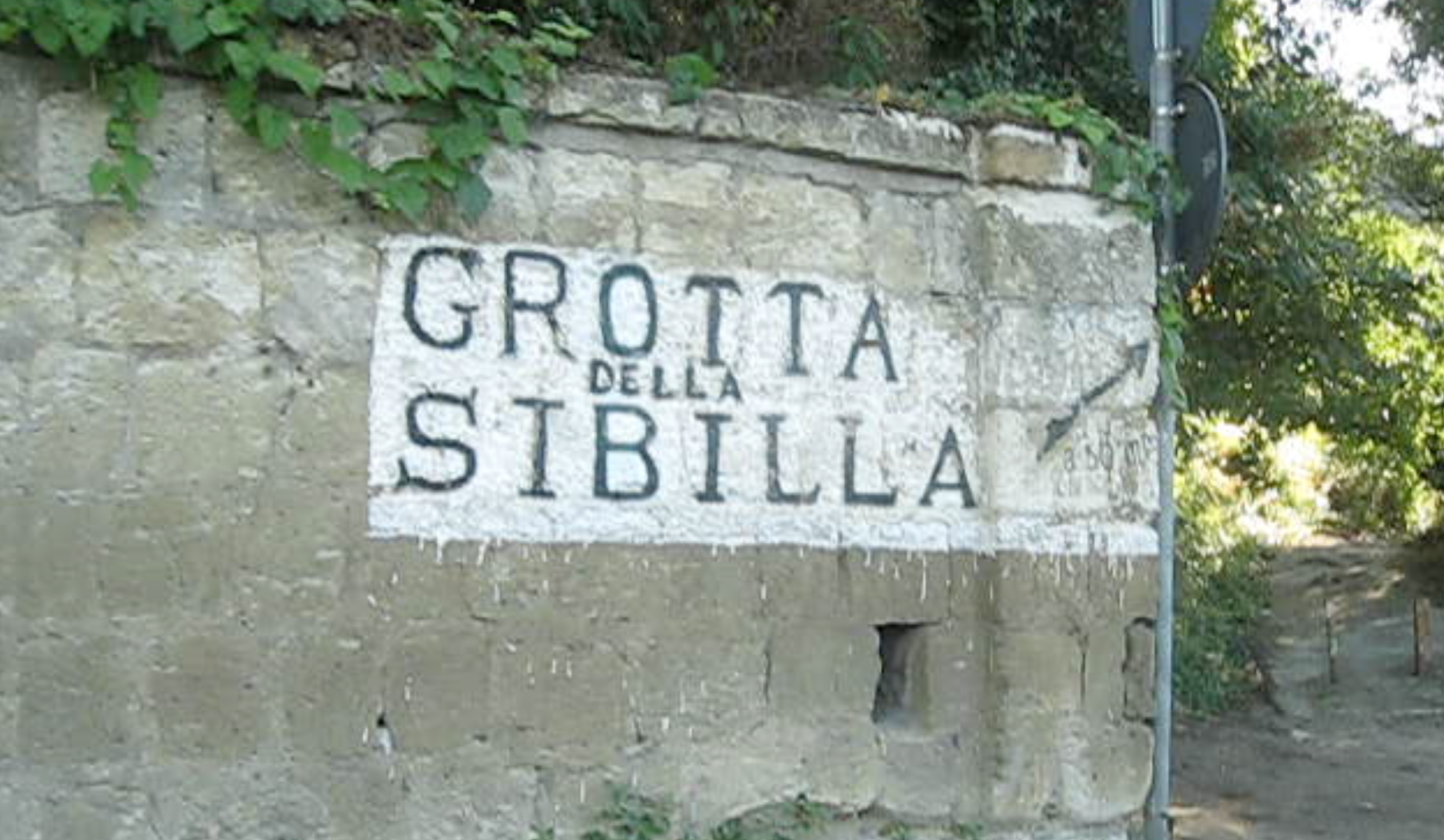 An open-ended conversation between Erica Scourti and artist and lmmaker Anja Kirscher, exploring some of their shared, though divergent, research interests in immersive and embodied technologies, animacy, the cognitive nonconsious and expanded notions of story-telling and self- narration. 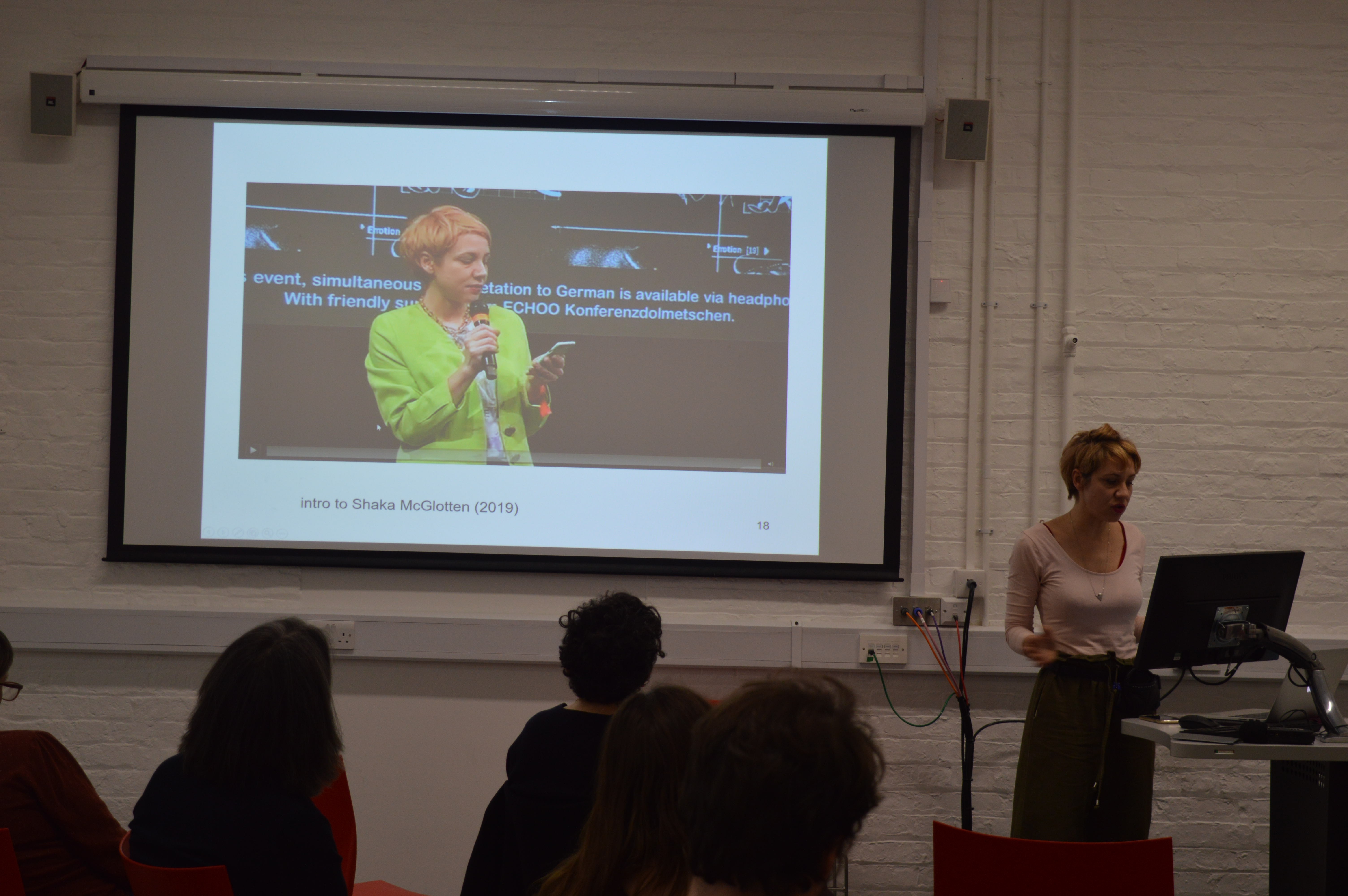 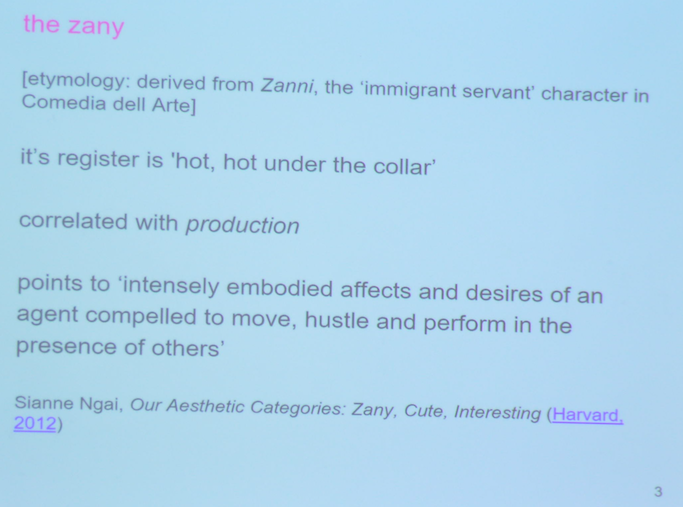 Ash has invited curator and organiser Louise Shelley to discuss her recent research into worker-led and cooperative structures, in relation to her current public programme

at Cubitt Gallery as their 12th Curatorial Fellow. Louise is also a member of the Cinenova working group, a voluntary collective that has continued the distribution work of the feminist lm collection since it saw its funding removed in 2001. This session will take a workshop format, where we will explore as group potential routes of crossover between art and organising, and the di erent ways of practicing collectivity in this context. 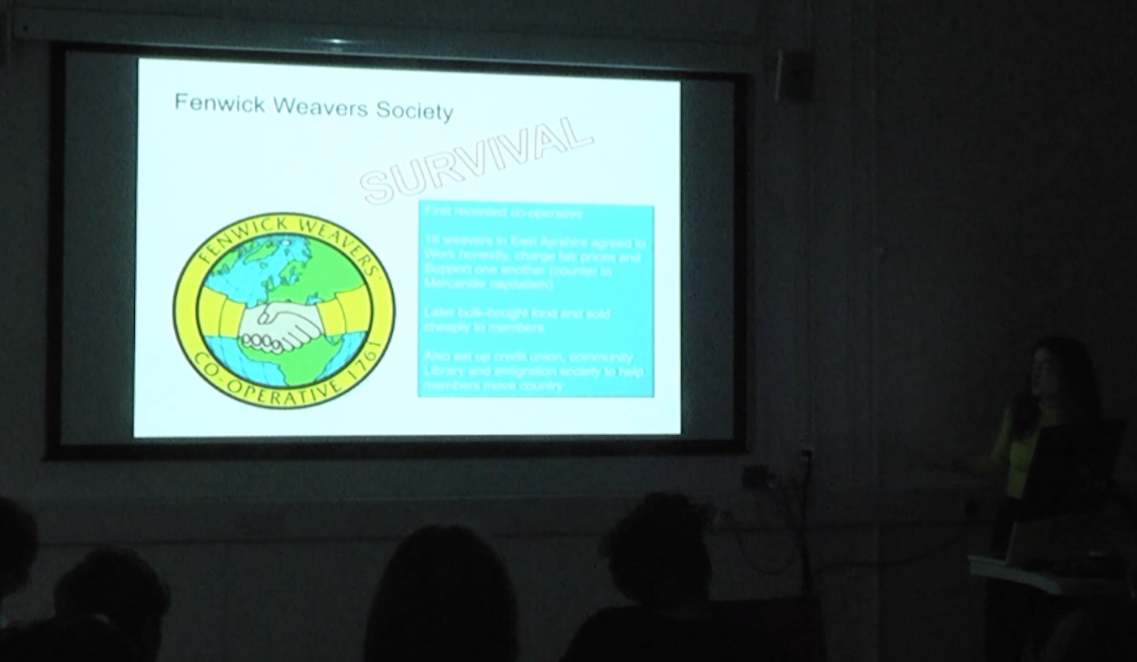 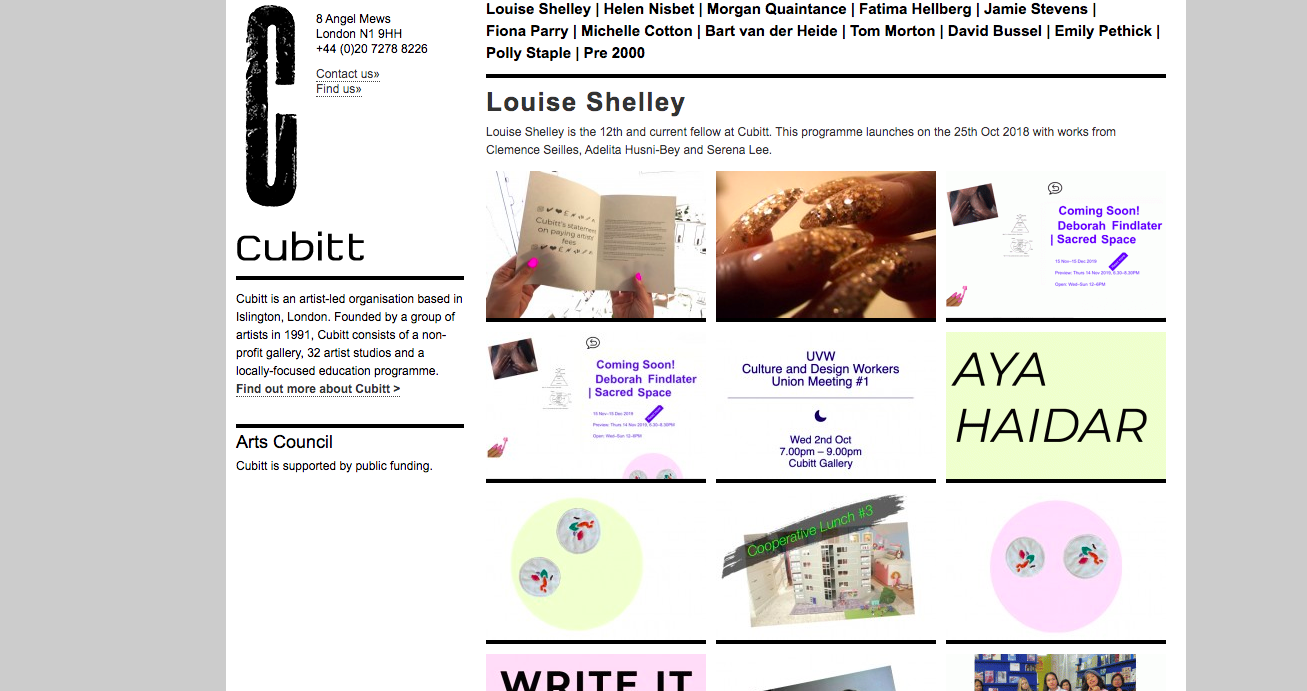 I am sorry I am not able to to take part in person. I will, nevertheless, contribute something in writing produced during the time of the Flashpoint which will add to the documentation materials. I would like to reflect on the division of labour, time, care, attachment, modes of thought etc. and how we experience division as conflict, both within ourselves and in society.

Giulia Damiani is a writer and researcher at Goldsmiths University in London. She’s current- ly completing her PhD in the Art Department (AHRC scholarship) focusing on the feminist ar- chive of Le Nemesiache in Naples and exploring her writing practice through the lenses of land- scape, theatricality and prophecy. She collab- orates with performers to create collaborative work out of archival and feminist practices. Her writing has been shared widely in art platforms and magazines including the Barbican Centre (UK), the ICI’s upcoming book Over and Over and Over Again (Berlin), EROS press and Umbigo (PT). In 2018 she presented her performance ‘As en- chentes entre os incêndios’ in São Paulo (Brazil). She teaches in the MFA Curating at Goldsmiths. www.giuliadamiani.eu

Daniela Cascella (Italy/UK) writes through sound, literature, and art. Her work is driven by a longstanding interest in listening, reading, writ- ing, recording. She has published three books that articulate various forms of writing-as-sound- ing: Singed(Equus, 2017), F.M.R.L. (Zero Books, 2015), En Abime (Zero Books, 2012). She teaches in the MA Sound Arts, LCC / University of the Arts London and was recently awarded a C3RI scholarship to undertake doctoral research at She eld Hallam University. She was Assistant Professor in Writing, Bergen Academy of Art and Design and has published and lectured interna- tionally. www.danielacascella.com

Erica Scourti is an artist and writer based in Lon- don and Athens. Her work explores biographical writing and bodily inscription in the performance and representation of subjectivity. Recent solo shows include Chief Complaint at Almanac, Lon- don and Spill Sections at StudioRCA (both 2018); group shows include the High Line, New York, Wellcome Collection, Kunsthalle Wien, Hayward Gallery and EMST Athens. Her writing has been published in Spells: 21st Century Occult Poetry (Ignota Press, 2018) and Fiction as Method (Ster- nberg, 2017) amongst others. Scourti is guest editor of the Happy Hypocrite journal (2019) and was a resident at Rupert, Lithuania, in summer 2019. ericascourti.com

Anja Kirschner’s films and installations draw on factual, literary, and pop-cultural sources. They address questions of materiality, digitality, and narrativity, and how these factors contribute to the (de)formation of subjectivity and political agency. She is currently doing a practise-led PhD at the Royal College of Art, London, super- vised by Prof. Johnny Golding and Prof. Kerstin Stakemeier. She was the winner of the Jarman Award in 2011 (with David Panos) and recent exhibitions and screenings include: The Very Impress of the Object, Calouste Gulbenkian Museum, Lisbon (2017); Paratoxic Paradoxes, Benaki Museum, Athens (2017); Postapocalyptic Realism, Museum Brandhorst, Munich (2017); the BFI London Film Festival (2016); the Berlinale International Film Festival Berlin (2016) and the International Film Festival Thessaloniki (2016). For further info see: anjakirschner.com

Ash Reid’s performance-based practice re ects her experiences in support work and organis- ing. Recent projects have looked at cognitive behaviour therapy techniques and role-playing game structures, performed through ongoing communication with others, publicly and in private. Ash was a voluntary member of the Cinenova working group, a feminist lm distrib- utor in London, and from 2018 until 2021, she is undertaking research into the collection as an MPhil/PhD candidate at Goldsmiths, University of London.

Louise Shelley is the Cubitt Curatorial Fellow for 2018/19 where she is developing a 15-month public programme working from the structure of Cubitt as an artist-run co-operative. Speci cally how can the gallery in this context develop col- lective ways for working, pedagogy, economies and presentation.

Marlene Haring (b. 1978 in Vienna, lives and works in London) deals with the social construc- tion of places and events. Her work — perfor- mance, intervention, installation — re ects and intervenes on the regulations and conventions which govern social relationships and be- haviours. It stems from site-speci c investiga- tions in which she is both researcher and guinea pig. The social construction of relationships and identities is her material. Her work is perfor- mative because: it creates and alters situations. She makes artworks that do what they say, and a bit more. She is currently writing a book from the perspective of sculptures of female bodie in public places, some of them pregnant, who, discovering amazing powers of endurance, com- munication, memory, the limits of their patience, their sisters and their sisterhood, come down from their pedestals to make some change hap- pen. Documentation of work and CV: marlene- neharing.info