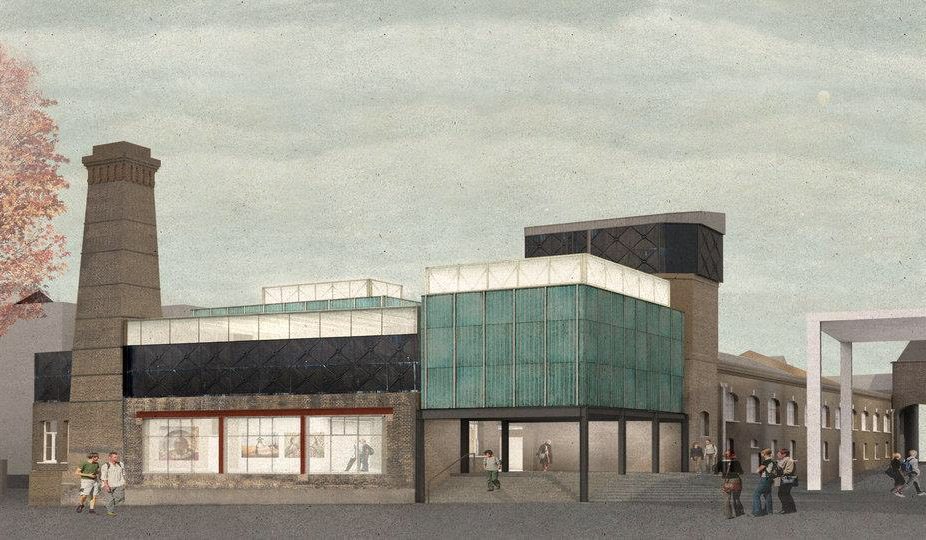 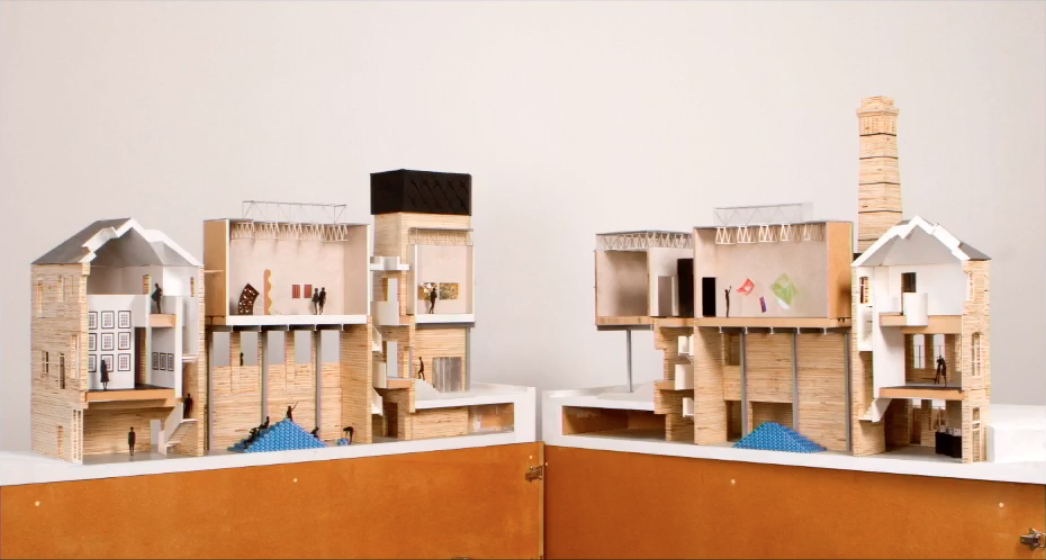 Working with the designer Liam Healy (Design department, Goldsmiths, University of London), our group devised a workshop to position and explore Goldsmiths Center for Contemporary Art as an example of an infrastructural object — that is, a result and realization of a complex set of related and interlocking intentions, conditions and stakeholders. This allowed us to do two things. Firstly, to collectively discuss the some of the specific strands that made a gallery possible — University policy, the process of selecting and hiring its staff, and the perspectives of the architects — as fields in themselves, and as paths towards the realization of a university gallery. Secondly, this offered the context in which to imagine these factors as a whole, as they were combined into an actual space, and as we might re-imagine its construction. As a token of what we suggested was a more general approach, the Goldsmiths Center for Contemporary Art, was seen primarily as a vehicle to develop new frameworks of analysis that go beyond the singular institutional blueprint, to consider the infrastructures of policy and economic conditions. 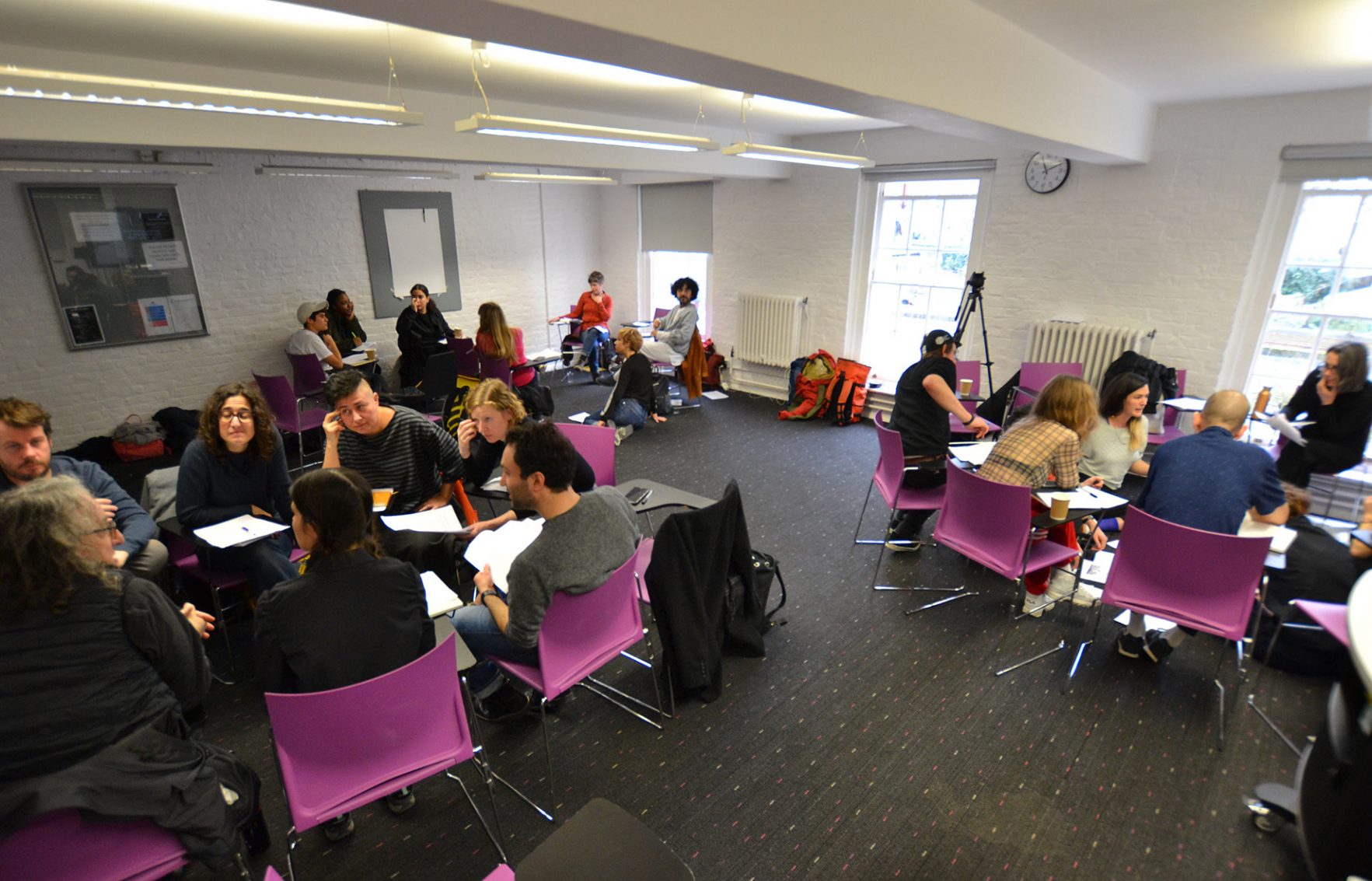 Through a ‘reverse design brief’ workshop, we proposed to work backwards from the gallery as an existing object, to speculate on its potential founding aims. We proposed this method to explore its structural and methodological generalities and particularities, to see if these might be used towards different ends.  Drawing on Mark Fisher (2016), we described this as a ‘weird,’ live action role-play (LARP). By doing so, our intention was to open an "egress between this world and others" (p.19) – a speculative past, of what the gallery might have become given a different set of conditions. By (re-)enacting alternative histories we devised a process of speculation to problematise and to re-imagine that which already exists. The first aim being to understand and unpick the means and interests being served by the gallery. And second, to turn and ‘adjust the dials’ on the baked-in assumptions and decisions concretised in the gallery and its infrastructure. For example, we asked, who wasn’t present at this, or that meeting, and whose interests weren’t accounted for? By retelling the past our aim was to generate alternative, parallel ‘versions’ of the gallery. 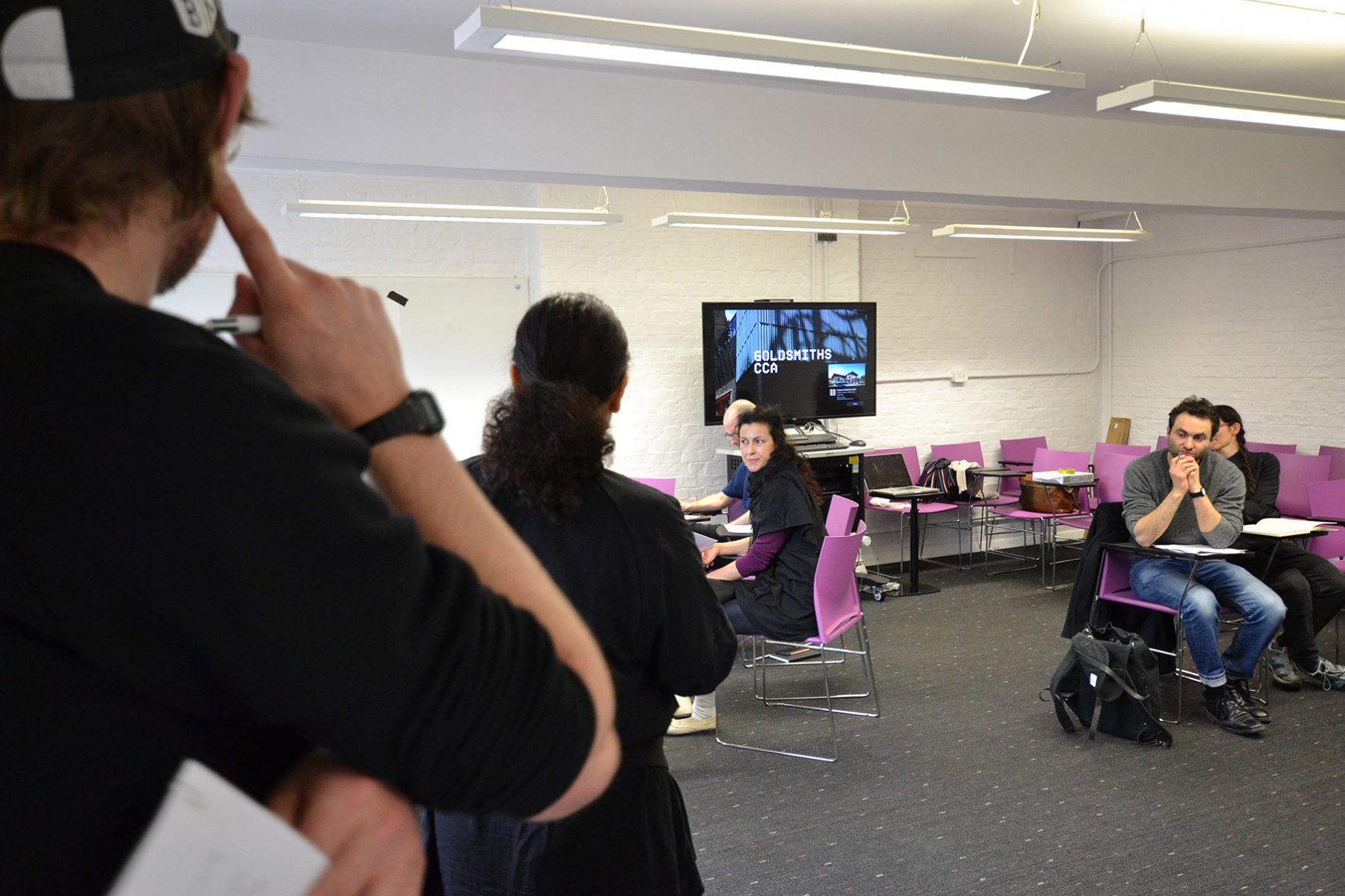 Concretely, the workshop explored Goldsmiths Center for Contemporary Art around three themes: economic, cultural, and pedagogical. The room was arranged into three corresponding scenarios that could create an architecture in which to role play one of three meetings: a policy planning meeting, a lecture by the architects and a selection panel for the galleries’ prospective director. Each scenario was accompanied by examples of publicly-available documents and artefacts surrounding the gallery. During  the workshop participants were asked to ‘invite’, define the interests of, and speculatively ‘play’ new potential stakeholders that were not initially present. At the end of the workshop the newly assembled group diagrammatised what these emerging, often contradictory interests might be, and proposed a set of demands that their group would make on the gallery. 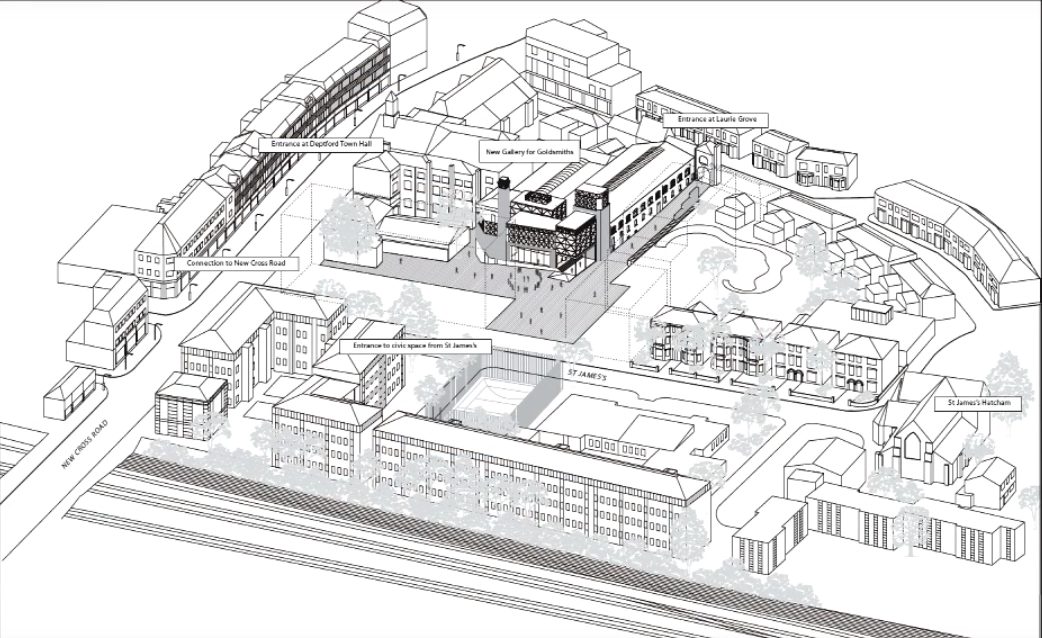 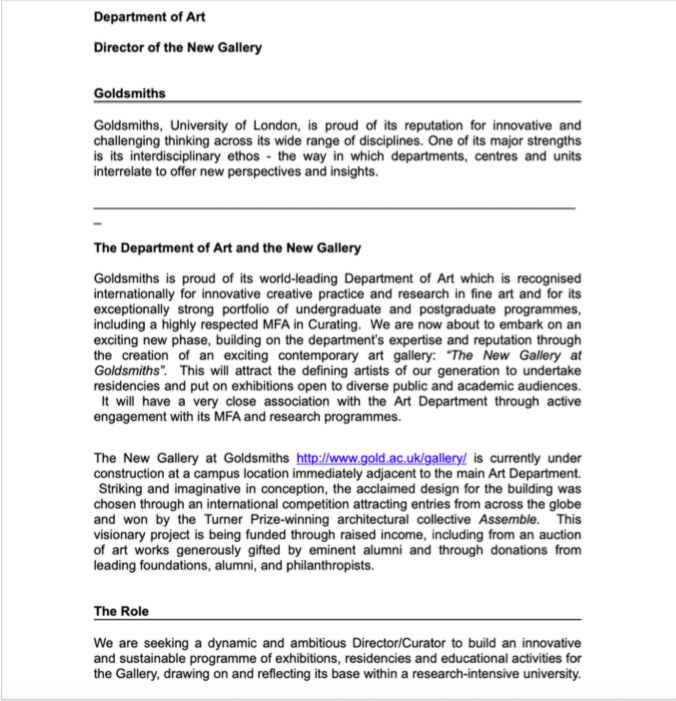 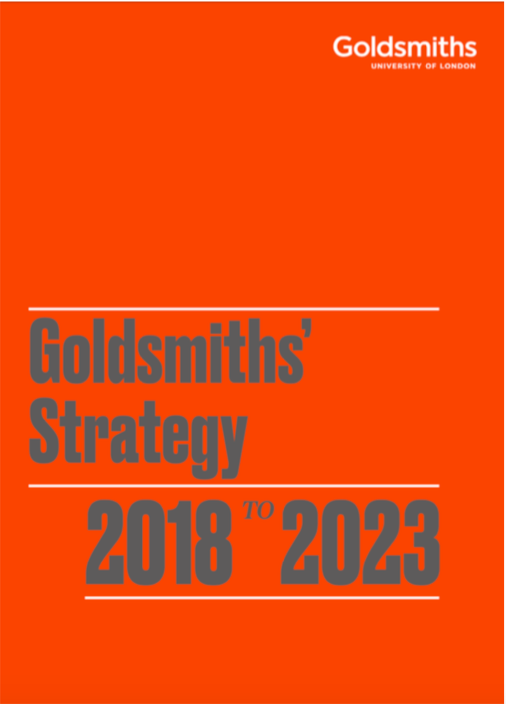 Based on this set up, the Art Mphil/PhD cohort and invited guests were asked to fill in character cards, and to use these characters to work from a solution (the gallery itself) to imagine a set of descriptive problems, dynamics, or functions by which to diagram the gallery, and from which to build at a later date. 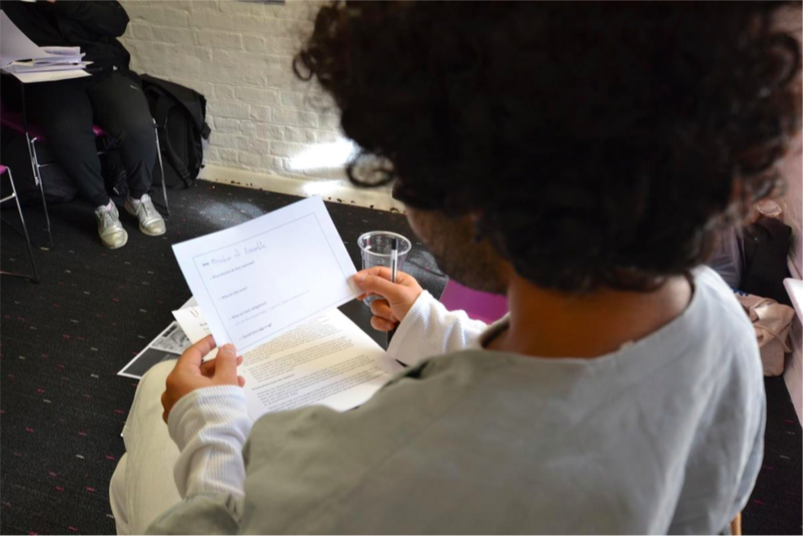 We hoped that this might offer a new route to thinking about an object like GS CCA as more than just a site that repeats condensed or crystallised relations that already exist, and as having a role in challenging or changing these. 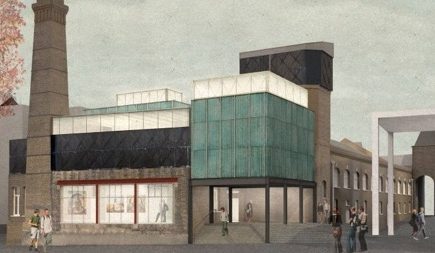 Goldsmiths Center for Contemporary Art is a complex thing. It can be viewed as many things. Firstly, it increases the visibility of the university brand, embedding Goldsmiths reputation by providing a different public space. Secondly, as a new and key element of the overall infrastructural offer, it becomes a visible and public asset of the university. Along with the Curzon cinema and George Wood theatre, it is considered as part of a cultural hub also able to serve the wider/local community. The cultural hub contributes to the university’s response to the Mayor of London’s “Culture for All Londoners” strategy, and forms part of Goldsmiths’ commitment as a charity to engage with its community. In this it can also be said to indicate a broader need for Universities to have an impact on wider society.

It was our hope then to ask if these functions can be understood and perhaps mobilized separately to the gallery as consolidated object or a place to display art, and to what other ends these factors might be pointed. 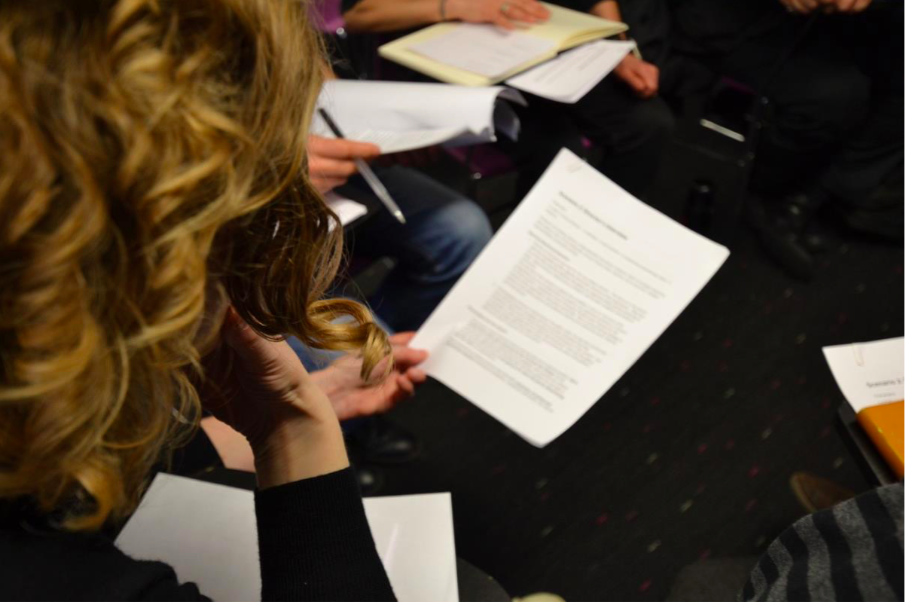 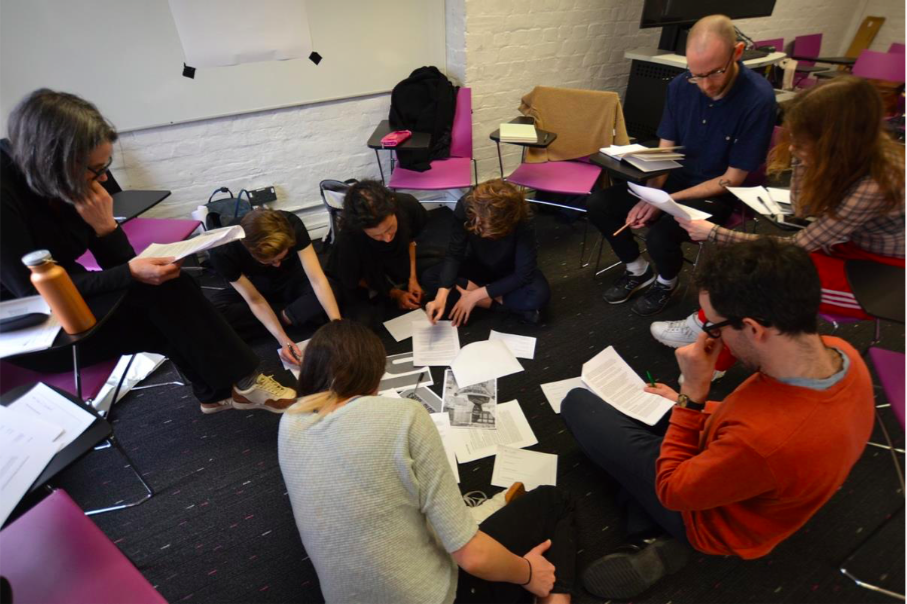 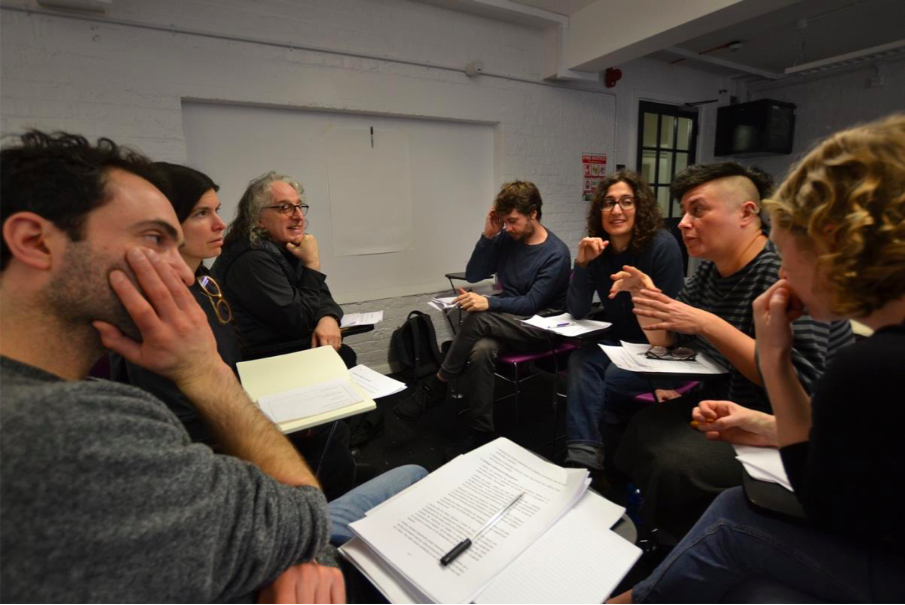 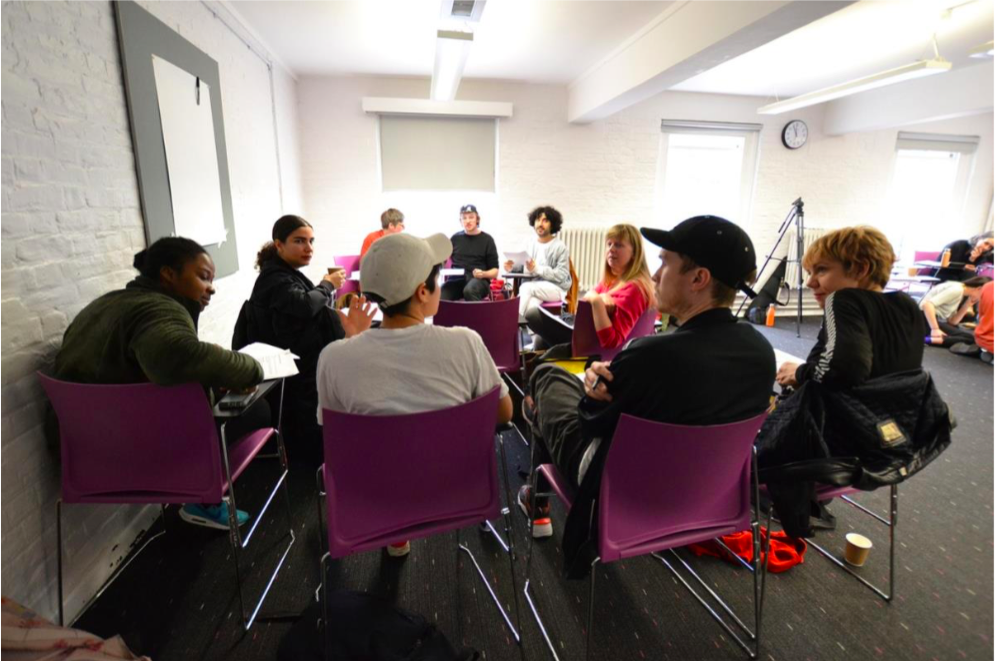 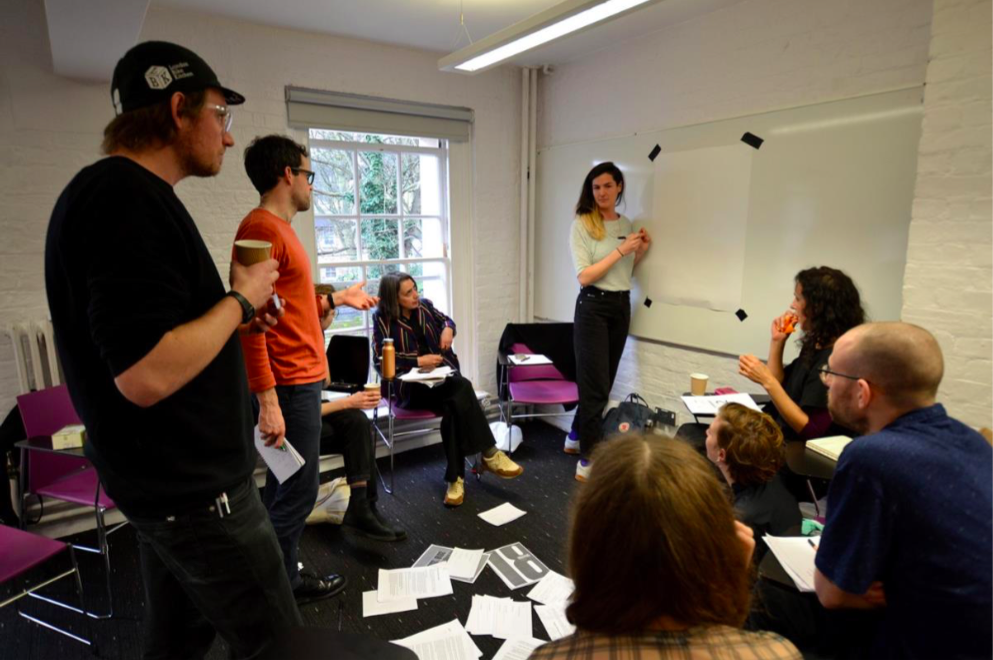 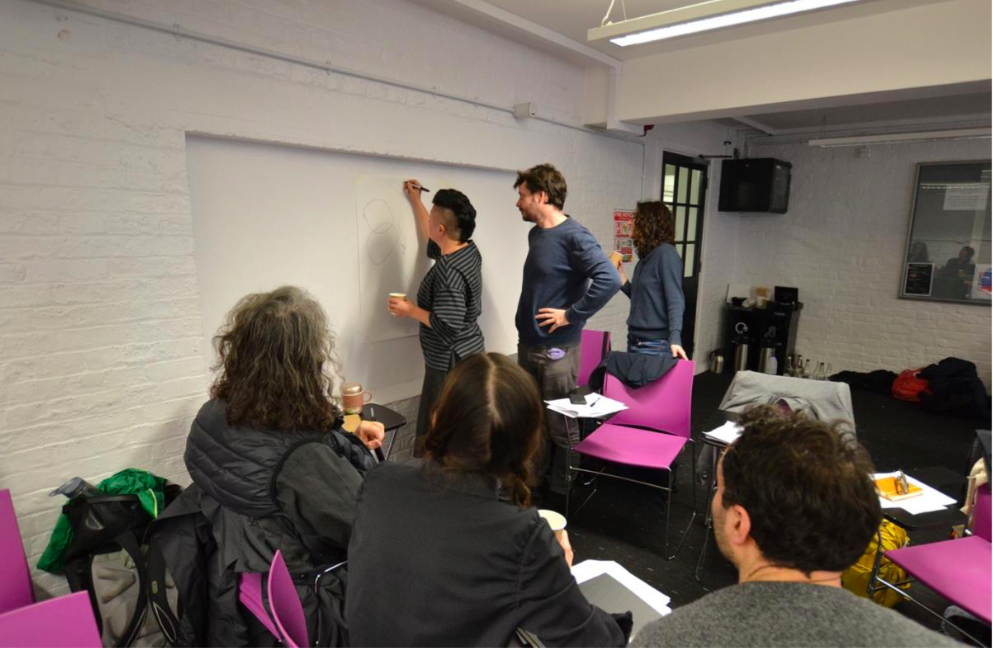 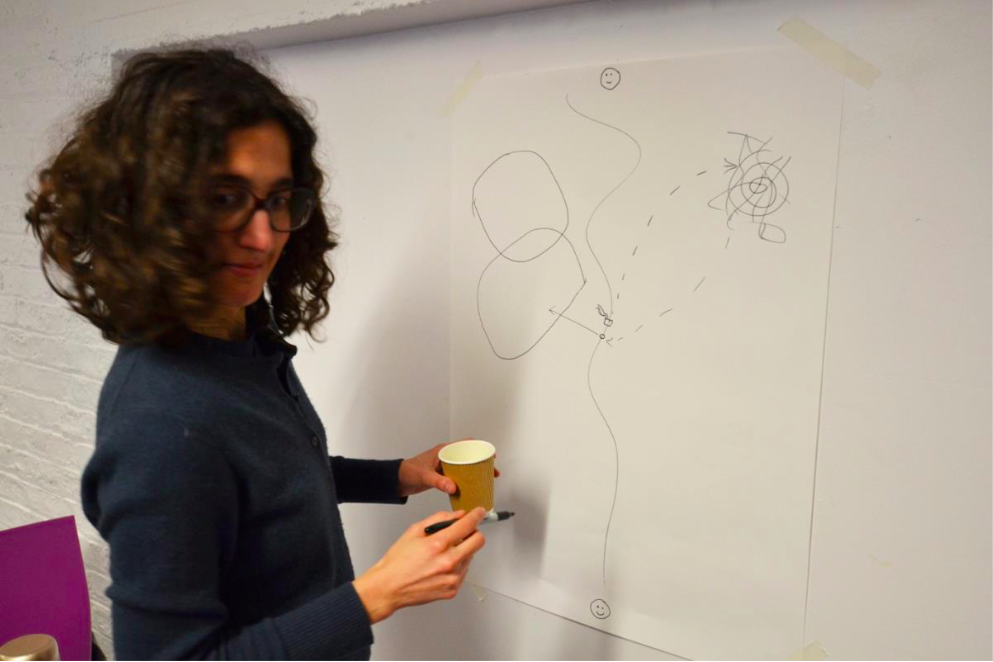 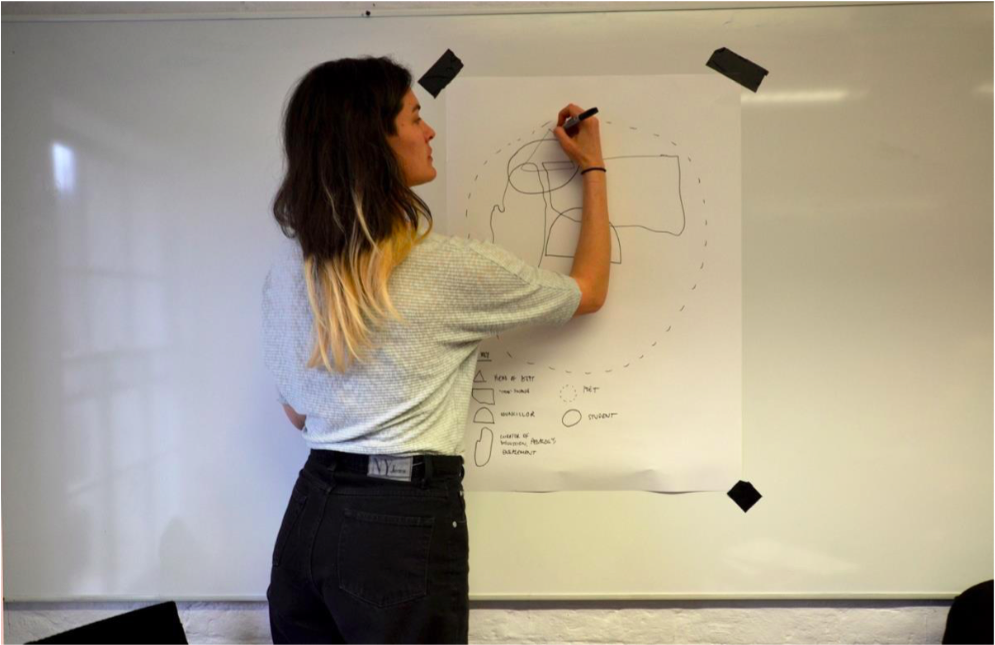 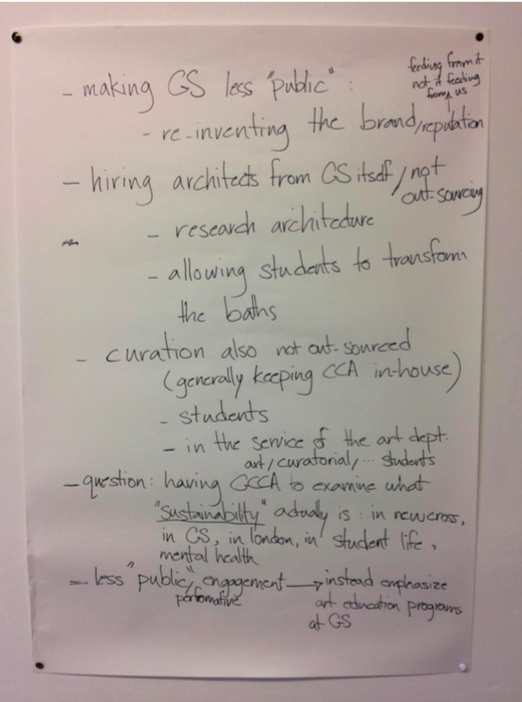 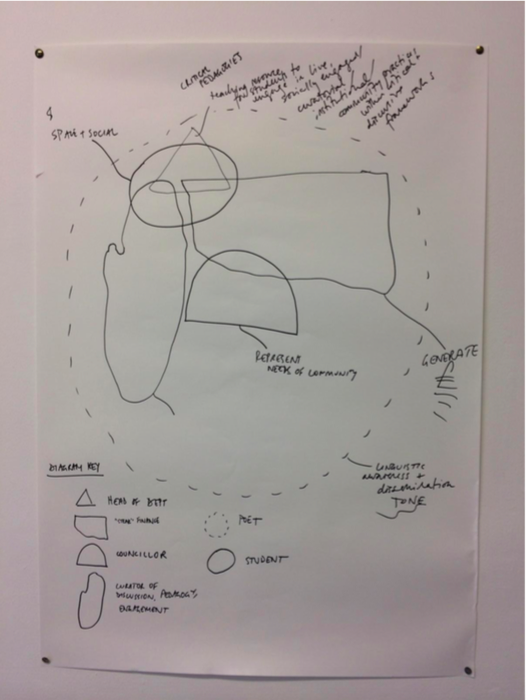 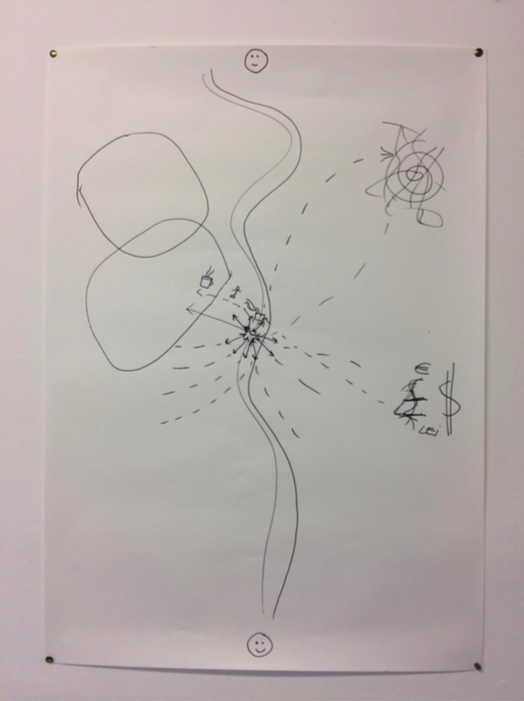 Tom Clark is a curator, editor and writer. He teaches and has works on curatorial and publishing projects internationally. He is currently an AHRC/CHASE-Funded PhD Candidate at Goldsmiths, University of London. His research explores infrastructural figures, politics and imaginaries in art institutions.

Liam Healy is a designer and lecturer at Goldsmiths. He is a component in the disparate, collaborative collective DUF: http://duf.space/; and is currently completing his PhD by practice with the working title of: Designing Unlikely Futures: Empirical Speculation and Prototyping in European Migration Routes, funded by AHRC Design Star scheme.

Bahar Noorizadeh is a filmmaker, writer, and platform designer. She works on the reformulation of hegemonic time narratives as they collapse in the face of speculation: philosophical, financial, legal, colonial, futural. Noorizadeh is a founding member of BLOCC (Building Leverage over Creative Capitalism), a research and education platform that proposes pedagogy as strategy, to alter the relationship between Contemporary Art and the planetary phenomena of urban renewal and social cleansing. Her current research examines the intersections of finance, Contemporary Art and emerging technology, building on the notion of “Weird Economies” to precipitate a cross-disciplinary approach to economic futurism and post-financialization imaginaries. She is pursuing this work as a PhD candidate in Art Practice+Theory at Goldsmiths, University of London.