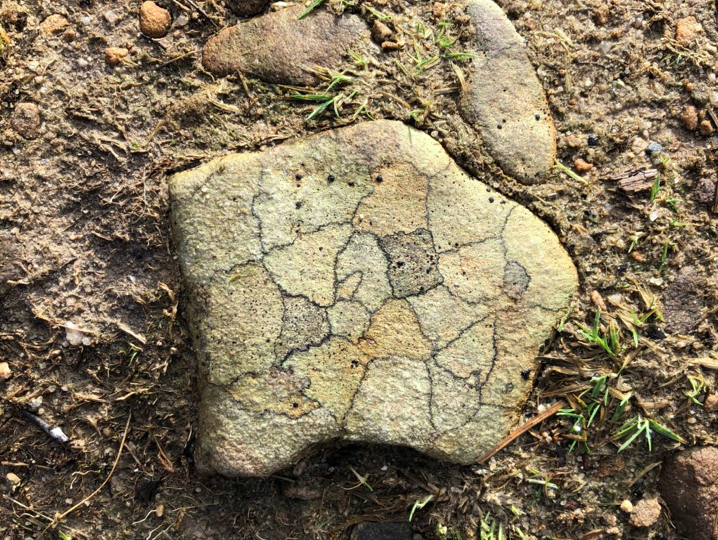 How do we listen simultaneously to both human and nonhuman worlds?

How can we be 'open to the quirky nature of nonhuman existents'?

How do we respond to Povinelli’s suggestion that we might 'refashion bodies and landscapes into mutually obligated bodies'?*

And how may stewardship, planetary and/or nonscalable approaches function in one’s practice in relation to these questions?

The seminar shared reflections on an encounter with a form of existence (the river). Examining it as part of an improvisational artistic enquiry into networks, nonscalability and stewardship.

In January 2019 one curator- and three artist-researchers/explorers/adventurers attempted to enter into a dialogue with the landscape of north eastern Lancashire. With Elizabeth Povinelli’s Geontologies: A Requiem to Late Liberalism (2016) as company they ate, slept, walked, talked along the River Wyre - the river. They took and gave back; witnessed and were witnessed.

In this open and discursive event, we diverged and coalesced around what arose through, before and after, January’s encounter.

* Elizabeth A. Povinelli, Geontologies: A Requiem to Late Liberalism (2016) 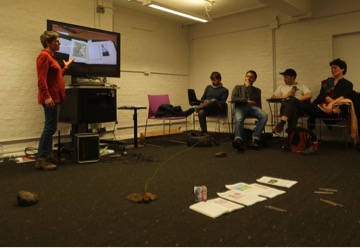 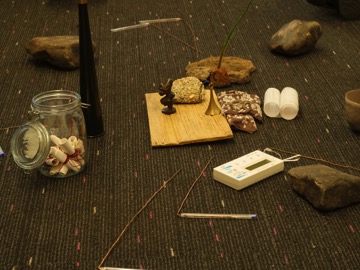 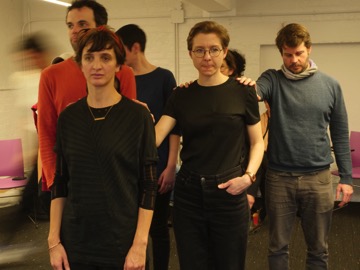 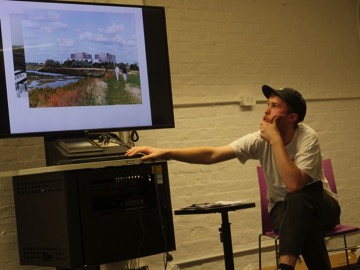 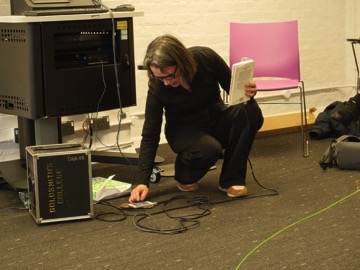 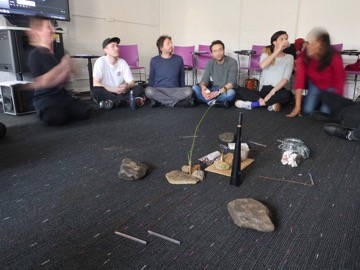 Laura Burns
As a response to ecological crisis, Laura’s research considers the nonhuman and human ancestors as primary collaborators, developing a practice based on modes of deep listening. She has worked specifically with the human, river and stone ancestries arising out of the River Wyre in Lancashire. Her relationship with place is influenced by hearing/telling the oral poetry of land-based communities. She uses voice as a mode of wayfinding and listening, feeling the relationship between language and matter through practices of divination, sound-tracking, critical theory/thinking and dreaming. Working through dance and choreography, the act of stewardship is a position from which to explore what is possible at the boundary of listening with the nonhuman. Training in Systemic Constellations and Kundalini Yoga underpin her artistic practice. www.lauraburns.co.uk

Morag Colquhoun
Morag Colquhoun is an artist based in rural Wales. She works site-specifically with communities in environmental contexts and is interested in developing work that emerges from a zone of uncertainty, exchange and dialogue. As a PhD researcher in the Art Department at Goldsmiths, her practice-led project Trofannolismo reimagines a planetary Tropicália from a perspective of rural Wales. She is currently working with two rural Welsh communities - Ynys Enlli (Bardsey Island) and Elan Valley reservoirs - while focusing on communities in South America (Salango and Chamana) that are known to her. This reveals common issues, including touristification, local production, water resources and climate change. In response, she is making a series of cross-cultural assemblages, including botanical beeswax models, collaborative films and YouTube playlists. www.moragcolquhoun.com

Warren Harper
Warren Harper is a curator, writer and researcher based in London. His work has reflected on the recent and historical cultural shifts of his home county of Essex, from its architecture, industry and how communities engage with or are impacted by these changes. He is a PhD candidate at Goldsmiths Art Department where his practice-based curatorial research project will investigate the relationship between the nuclear landscape of the Blackwater Estuary, home to Bradwell Nuclear Power Station, and its communities and technologies. In 2016 he participated in a residency programme with Arts Catalyst and S-AIR in Hokkaido, Japan, to research nuclear power and alternative energies. There he initiated, alongside James Ravinet, research-led project Institute for the Recognition of Peripheral Interests (IROPI). www.iropi.org www.warrenharper.info

Bridget Kennedy
Bridget Kennedy is in her first year of a Fine Arts practice led PhD at Goldsmiths, focusing on industrial heritage and the legacy of the nuclear power industry. Her interest in nuclear culture began in 2014 through Power in The Land, a visual arts project, during which she investigated the cultural significance of the closure of Wylfa nuclear power station on Anglesey, North Wales. Creating artworks for Power in The Land opened up new areas of interest such as deep time (Jay Gould, 1988), geophilosophy (Deleuze and Guattari, 1980), and a re-examination of the Anthropocene (Parikka 2015, Grusin, 2017). The geographical focus of her research has now shifted to Sellafield, Cumbria. Here she is looking for ways to create a new imaginary of nuclear futures via a performative installation practice. www.axisweb.org.bridgetkennedy

Fourthland
Fourthland was established by artists Isik Sayarer and Eva Knutsdotter in 2008, as a social practice with the aim to merge art and life to make new myths about land and people. Through a process-led research the practice revisits notions of the sacred, the poetics of space and object, and the mysticism of the subconscious, working with these themes to excavate old histories and future imaginaries with people and communities. Over the years Fourthland have created relationships with a variety of national and international collaborators, communities, estates, institutions and multidisciplinary teams including: climate scientists, psychologists, architects, shamanic practitioners, herbalists, anthropologists, urban researchers and filmmakers. Isik and Eva both graduated in Fine Art from the CASS School of Art in 2011 and have both completed additional trainings in yoga sound and movement. Recent exhibitions and performances include Kestle Barton, PEER, SPACE, Somerset House, Arnolfini, Barbican, Errant Bodies, UCL, South London Gallery.

Janet Strachan
Janet Strachan is an expert on climate change and development policy. She has worked with over 43 countries across Africa, the Caribbean, Indian Ocean and the Pacific. For many years, she supported countries during negotiations on environmental treaties, climate change and sustainable development. Janet was Director of economic policy for the Commonwealth Secretariat, and most recently Director of LEDS GP, an international network of senior government officials from 72 countries that are charged with creating low-emission development pathways in their own countries in response to the Paris Agreement on climate change. Janet’s approaches include commissioning policy research, framing and delivering debates for ministers and heads of government, building partnerships amongst key organisations to deliver practical support, and advocating for change. She is passionate about bringing practitioner and developing country voices to the forefront of international debates to secure robust and sustainable approaches to development for us all.