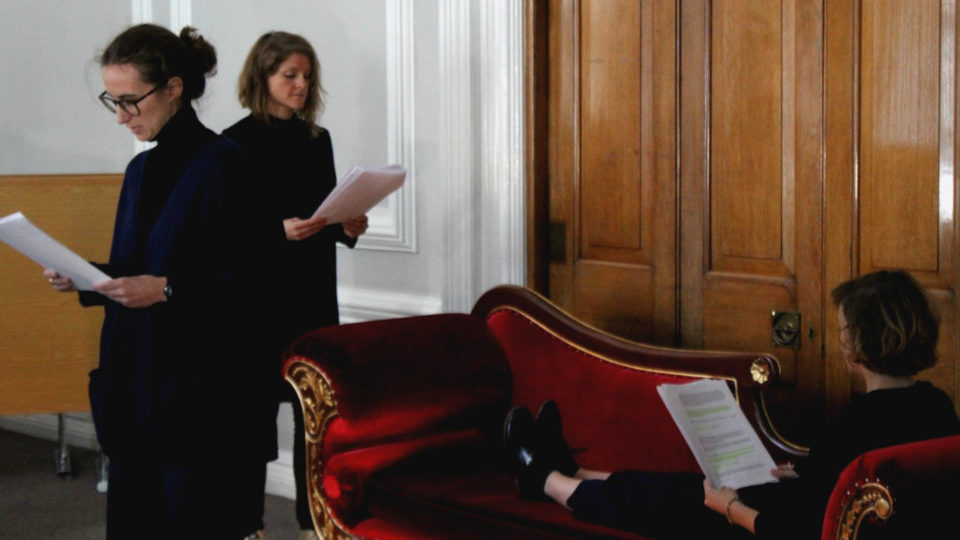 This seminar presented the organisers’ approach to the questions of the translation, archive and theatricality. We considered what possible relations can be generated by thinking together departing from our individual research and playing with these three terms. The seminar spoke in the negative: we looked at that which cannot be translated and the untranslatability as a strategy to resist appropriation. We looked at the way archives, material and virtual, cannot be affirmatively reproduced and need to be articulated in non-linear ways that open up new possibilities and imaginary futures. We tested the potential of theatricality – a word also used to indicate the deceptive nature of women – to be the failure of being in the present, a dangerous displacement away from the confines of identification or the space of theatre.

Curating, dramaturgy and letter-writing were suggested as practices of caring, a notion that is considered here in relation to lamentation and continuous wailing. Furthermore, the seminar enacted and interrogated the notions of distance and proximity in relation to the archive, theatricality and translation to nourish different modes of being within these subjects.

What kind of connections with the past and the future can be conceived by revisiting, exhausting, shaking the origins of these terms? Following the organisers’ performance, the participants were invited into a conversation. How to deal with a conversation that is already theatrical, already at a distance, already written for its appearance, already public? Exposed to the other, an intruder, an interceptor, an alien, someone from another space? Private stories, theory and theatricality were exposed and performed.

Extract from the script of the performance below:

I am tired this evening. I was at a funeral yesterday in Spain and had to take a very early flight back to Brussels this morning. But I have so many notes, so many comments that I have been writing down. Last night I found it hard to sleep.

I’m thinking of the the lava that fell over Pompeii, covering, veiling, hardening the memory of a moment, its own burial being its preservation. Translating the archive as an encounter between poetry and history.

I have moved from the fluidity of lava and the explosion of volcanos to re-appropriate the idea of hardness. Thinking away from paternalistic views and thinking hardness as a form of writing, as the glory of an urban space, as crystallisation. In my notes from São Paulo I wrote: Eventually I confess that the hardness of the archive I want to keep is the impact on my own being. Not the tiredness of absorbing and identifying with the archive, but its slow crystallisation in my identity.

I am thinking of the archive as something that has a life of its own. That transgresses the idea of a mere collection of documents, and that goes beyond being a repository of what an authority legitimizes to be evidence and truth. I am thinking of the shadows in the archives, of the ghosts and prophets, of the (lost) memories and those invisible affective connections that built the unveiled movements between the women who met to talk, exchange and to organise.

I am sitting at my writing desk in Vienna, in the silence of an early morning in late September; in the quietness between the fuss of my days, having moved house for the third time this year. I am late. Always late. The delay being my constant attendant, my complice, my ally.

Or just in time to write back before I loose track? Just in time, writing back, following the traces of your words, and how they crystallise in my head, in my heart, in my body, before they disappear under the ripples of new thoughts, references, ideas.

Teresa, you mentioned the falling into emptiness of the letter in relation to the space of the theatre. Does theatre enact a similar fall? Is its emptiness a wounding absence? I am thinking here of a quote from Samuel Weber’s text Theatricality as Medium, which I read this summer while I was in São Paulo. Weber says: ‘This itinerant host defines the space of theatre, theatre as space or, rather, as irreducibly problematic re-localisation. This ongoing and never conclusively settled setting of the scene distinguishes the theatrical play from the artistic work (…)’ Weber is addressing not only theatre as a space, but also the metaphorical re-localisation of the participants, the addressers as well as the addressees.

Does this being in-between amount to emptiness, a nowhere, a lack of space? What does it mean to have a location and to lose it?

Giulia, I am glad you brought up Samuel Weber. After your letter I decided to look for his book. I couldn’t find “Theatricality as Medium”, but have come across an essay of his called “Acting and Writing in Genet's "L'étrange mot de…"”

“Every theatrical representation, every spectacle is magical [une féerie], it is in the voice that cracks on one word… the magic is in the gesture that a certain moment is not in its proper place” , cracks, a fissure, an opening, a wound, he also uses Aristotle’s greek word “peritpeteia”, the tragic happening, as a sudden shock of a “double take”, the deviation of a gesture, a gesture a word that is not in its proper place, that has gone astray.”

Being late. Missing your words. Missing them, running behind them. I feel dis-located, somewhere else, not on site. Distant from your thoughts, as I try to grasp them with my intellect.

My head runs after them, while I notice how they resonate with my body. Your words sound in with body, with my breath.

I can breath your words. Some of them. I can feel their echo in my chest, in my stomach, in my pelvis. The echo is vibrating, it is beating. The grief, the lament, the loss. A child.

Falling out of time. Emptiness. It is not the emptiness of a void, a vacuum. It is an emptiness unlike this. While I am thinking of the nature of this emptiness, while I am trying to transfer its taste into a thought, the matter of translation comes back to my mind. I am thinking of the enigmatic writings of Walter Benjamin on language and translation such as On Language as such and on the Language of Man [1916] and The Task of the Translator [1921]. Benjamin's term "unähnliche Ähnlichkeit," the unsimilar similarity comes to my mind.

Like Echo I am just repeating this morning, I actually often think I would rather become a collector of other people’s words and linger with them, keep them for a while… but we do not own words do we? We do not own thoughts do we? Teresa

I hope you can see more clearly than me. Waiting for your gestures. Giulia

Thank you Teresa, thank you Giulia for the gifts of your words and your thinking that are not unnecessary. I feel the necessity of all this, calling for our advocacy, for our dedication, for us taking care. Barbara

Barbara Mahlknecht is a cultural researcher, curator, teacher, and art educator. Her work in curating, research and art education is currently dedicated to the intertwining of the practices of curating, social reproduction and feminist theory; to critical perspectives on the regimes of art education in relation to ideology and totalitarism as well as to questions of the translation and re-enactement in arts based research. She has conceptualised, often by collaborating with colleagues, a variety of exhibitions, conferences, and workshops situated in the inbetween of art, education and curating. Currently, she is working on her Ph.D. (AHRC scholarship) in Curating at Goldsmith University London.

Giulia Damiani is a writer, translator and curator based in London, and a tutor and PhD researcher in Art and Writing at Goldsmiths University (AHRC scholarship). She collaborates with performers to create diffractive and collective work out of archival and feminist histories. In her unique exchange with the group Le Nemesiache she starts from their idiosyncratic investment in the body, mythology and their geopolitical location. She combines these with the desire for fabulation and prophecy from the mythological places of the present. For example, she imagines archival traces of lava and the volcano Vesuvius through new materialist and feminist lens. These speak of an archive of extinction while opening to other systems of thought. In her performances traces become theatrical scenes, invoking the problematic re-location of the trace in other places, in the present for a future response.

Teresa Calonje (UK/Spain) is a researcher and curator with a specific interest in the question of collecting live art. Calonje has a background in Art History (Complutense, Madrid) and Political Economy and Development Studies (SOAS, London) and is currently a PhD candidate at Goldsmiths College focusing her research in the live and the existential and legal implications of its ownership and use.