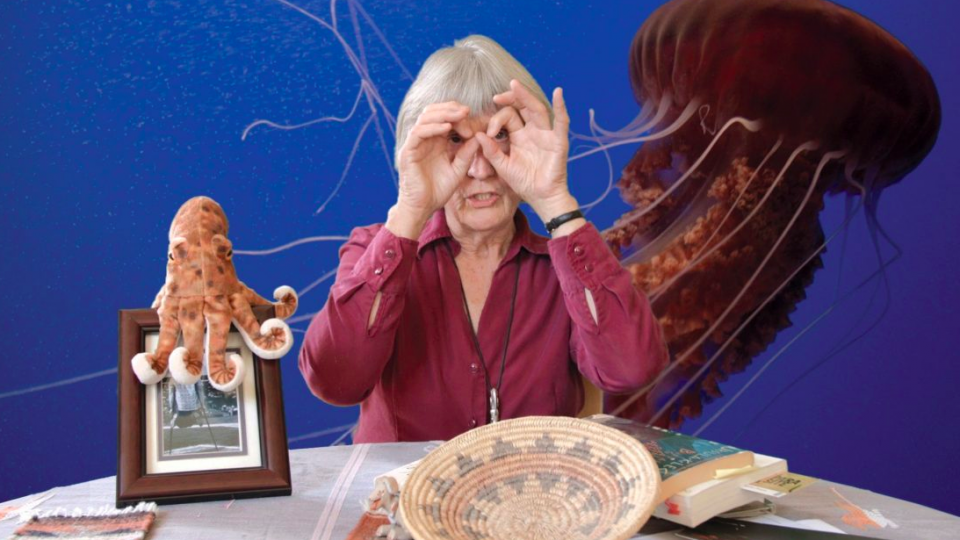 Feminist thinker and historian of science Donna Haraway is perhaps best known as the author of two revolutionary works: the essay "A Cyborg Manifesto" and the book Primate Visions. Both set out to upend well-established "common sense" categories: breaking down the boundaries among humans, animals, and machines while challenging gender essentialism and questioning the underlying assumptions of humanity’s fascination with primates through a post-colonial lens.

DONNA HARAWAY: STORY TELLING FOR EARTHLY SURVIVAL features Haraway in a playful and engaging exploration of her life, influences, and ideas. Haraway is a passionate and discursive storyteller, and the film is structured around a series of discussions held in the California home she helped build by hand, on subjects including the capitalism and the anthropocene (a term she "uses but finds troubling"), science fiction writing as philosophical text, unconventional marital and sexual partnerships, the role of Catholicism in her upbringing, humans and dogs, the suppression of women’s writing, the surprisingly fascinating history of orthodontic aesthetics, and the need for new post-colonial and post-patriarchal narratives. It is a remarkably impressive range, from a thinker with a nimble and curious mind.

Haraway and filmmaker Fabrizio Terranova (who we hear but don't see) are clearly at ease with each other, giving the conversations—which are punctuated by images of artwork and quirky animation—a casual, intimate feel. Terranova makes playful use of green screens to illustrate Haraway's words, or to comment on them. As Haraway discusses storytelling, we see an image of her in the background, writing. When the conversation turns to her own unorthodox personal relationships and the oppressive power of heteronormativity, the redwoods out her window are replaced by a crisp suburban street. Underwater invertebrates, one of Haraway’s fascinations, float by in the background of a room.

DONNA HARAWAY: STORY TELLING FOR EARTHLY SURVIVAL is a clever and insightful glimpse into the thought of a major contemporary figure.

"An ode to this thinker’s expansive mind and life. Besides a heady, speculative journey through theory, politics, sci-fi, and so much else, you get a sense of the deep joy that Haraway takes in all life." —Vice Magazine

"A heroine to a generation of women who are starting to call themselves cyberfeminists." —Wired

"A rare, candid, intellectual portrait of a highly original thinker; Haraway is a gifted storyteller who paints a rebellious and hopeful universe teeming with critters and trans species in an era of disasters."—Concreta Journal

"Feminist theorist and philosopher Donna Haraway has substantially impacted thought on science, cyberculture, the environment, animals, and social relations." —Margret Grebowicz, author of Beyond the Cyborg

"[After the launch of Cyborg, the 2018 Gucci collection,] creative director Alessandro Michele's post-show press conference feels like an advanced seminar in philosophy. His primary source, he said, was Donna Haraway's 1984 'A Cyborg Manifesto,' an essay questioning the boundaries between humans, animals and machines." —The Guardian

Fabrizio Terranova is a filmmaker, activist, dramaturge and teacher at the École de Recherche Graphique in Brussels, where he launched and co-runs the Master’s programme in Récits et Expérimentation/”Narration Spéculative”. He is also a founding member of Dingdingdong, an institute dedicated to raising awareness around Huntington’s disease. His 2010 experimental documentary film Josée Andrei: An Insane Portrait screened internationally and was adapted into a book published by Les Éditions du souffle. Terranova recently published the article “Les Enfants du compost” in Gestes spéculatifs (Les Presses du réel, 2015) and the film Donna Haraway, Story Telling for Earthly Survival.

In terms of research, writing, and teaching, Donna Haraway (born 1944) is one of the most important practitioners in a field that ties together science and technology studies, anthropology, and animal studies. She received her PhD. at Yale in Biology (but with an "interdisciplinary arrangement" with the Departments of Biology, Philosophy, and History of Science and Medicine). She began her teaching career at the University of Hawaii, Honolulu, moved to Johns Hopkins, and joined the History of Consciousness Board at UC Santa Cruz in 1980. Defying traditionally defined departmental categorization, Donna Haraway holds associate memberships in Anthropology, Environmental Studies, Feminist Studies, and Film and Digital Media. Throughout her work, Haraway explores the ties between technical and popular worlds and the thick traffic between natures and cultures.

Haraway is a leading theorist of the relationships between people, other organisms, and machines, her work having incited debate in fields as varied as primatology, philosophy, and developmental biology. "The Cyborg Manifesto," first published in 1985, has been reprinted or translated in numerous anthologies in North America, Japan, and Europe. In addition to a long list of essays, Professor Haraway is also the author of “Crystals, Fabrics, and Fields: Metaphors that Shape Embryos” (1976/2004); “Primate Visions: Gender, Race, and Nature in the World of Modern Science” (1989); “Simians, Cyborgs, and Women: The Reinvention of Nature (1991); “Modest_Witness@Second_Millennium.FemaleMan© Meets OncoMouse (1997); “The Companion Species Manifesto: Dogs, People, and Significant Otherness” (2003) and “Staging with the Trouble: Making Kin in the Chthulucene” (2016)

< Previous Transmission
Next Transmission >
This website uses cookies to improve your experience. We'll assume you're ok with this, but you can opt-out if you wish.Accept Read More